No-hitter against the Reds.

Well it happened, and I really wish I wasn't there to watch it, kinda.  Busy day yesterday......so let's start off with the non-sports related stuff... 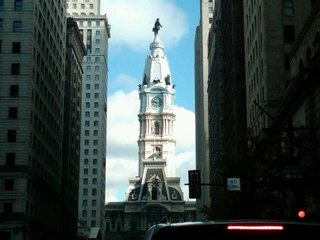 Baker and I went up to the historic district and got to see some pretty amazing things.  Driving into downtown you saw the city square with a huge tower with Benjamin Franklin on top, which is the first image.  You just will not find that in any other city. 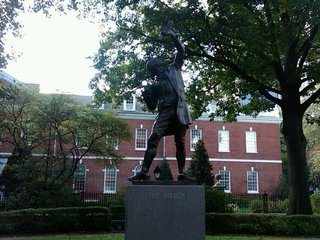 When we arrived to the historic district, we stopped at "The Signer" a statue trying to capture the signing of the Declaration of Independence and also the Constitution, which is the second picture.  We met one of the "interpreters" which is basically a historian and he was awesome. 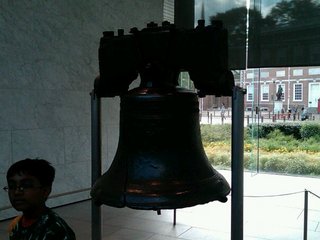 His name was Frank, and he started our behind the scenes tour at the Liberty Bell, third picture. Mind you, we got video of all of these so be sure to keep watching through the next few days. 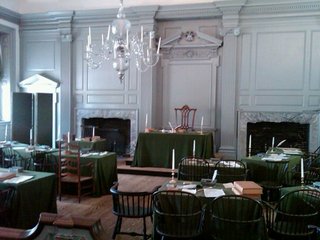 After the Bell he took us around and we ended up in Independence Hall, and in the fourth photo you can see the room where we signed the Declaration of Independence and Constitution.  George Washington sat in the seat at the front of the room, pretty sweet to be in the same room as our very first president. 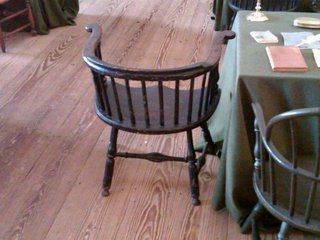 The fifth photo is the seat that Benjamin Franklin sat in, and you may notice it is a bit larger than all of the other chairs in there....(maybe he didn't invent the treadmill yet)  Very cool to walk in the same footsteps as them.  Oh, and Katie Couric walked in the back door with Nathan and I as we went into Independence Hall.  She was doing a story with Independent voters.

We then to Geno's and Pat's steak sandwiches. I was in a food coma for the rest of the day, no joke at all.  I had to go with Geno's because there was more juice. 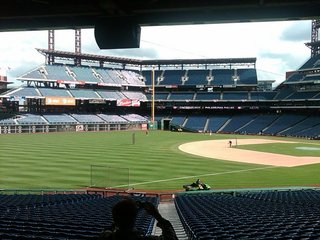 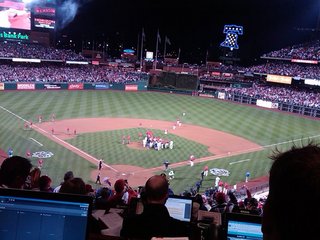 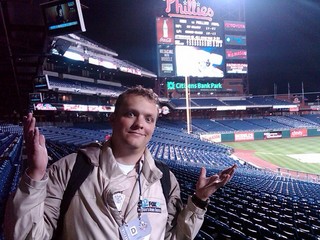 Then onto the game.  Very few Reds fans as you could imagine. We were outside for live shots via satellite for the 6 and 6:30 news, but I was able to watch the last two innings.  Craziness.  I am glad I got to see the no-hitter, by Roy Halladay, but it was not the way I woulda liked to see it, against the Reds in the playoffs.  But you can see a few of the photos.  Hopefully we can win against them on Friday.  I am going to wear my Arroyo jersey tomorrow all day.  Well we got to run over to the ballpark for practice.  Have a good one!