Update on first season's snow on the way 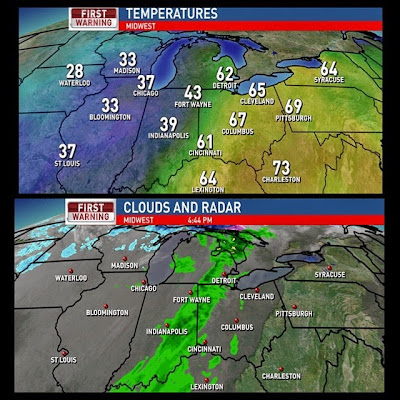 Boy... What a change!  We had the cold front come through Tuesday evening and it was a HUGE difference from one day to the next.  Nearly a 30 degree drop in no time.  With the colder weather comes snow and that is what we are tracking for the weekend.

Sure, we have had some flurries or a trace of snow... but this weekend could bring the first real snow showers of the season... AND even though most of us have dealt with snow on the roads before, the first snow ALWAYS causes dozens of accidents, so just take it a little slow... (There, no more preaching, HA!)

The American models, NAM and GFS, are pictured above.  They are the predicted snowfall totals by Sunday night.  You can click to enlarge the picture.  Both models (three separate run times) are bringing in the moisture from the south a little earlier (than Euro) and not as much.  They are showing up to an inch for most of Ohio with some pockets over an inch by Sunday night, but a lot of areas just under an inch.  Then it has us dry Monday.  So... not a lot, but enough to make the roads slick.  With temperatures below freezing much today and the next few days the snow will stick to a lot of areas like grass, mulch, and bridges.  The roads and pavement likely will need more time,but it could stick during some of the "heavier" snow showers.

The European model is a little different.  It is showing less snow for Sunday, but holding off on the moisture until more on Monday.  It is actually showing more snow than the American models, but it all looks to be timing at this point.  If the low pressure and the moisture slow down then we will have more to work with, but if we get most of the system to kick through on Sunday, then Monday will be pretty dry.  Either way we will see some snow... be sure to check back in for updates.

Either way... Buck's First Inch Of Snow Contest COULD end in the coming days.

The cold weather will stick around through the end of next week, but the days leading up to Thanksgiving we will warm back into the 40's and even 50's!!!  (Bet you are looking forward to 10 days out ;) ) See ya back here soon with an update, and until then... Have a good one!