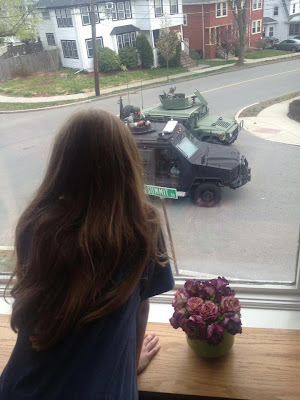 Photo from Thinksquad.
No time for a blog yesterday... glued to the police scanner, TV, and even more than those: Twitter.  The search for the Boston Marathon bombers was crazy.  I stayed Thursday night to keep an eye on the radar with the "storms" rolling in.  They weakened a LOT and so while I was here watching the radar I noticed a lot of buzz on Twitter.  There was a police officer shot at MIT in Boston.  I tried turning on the national network news and they had nothing, but twitter was blowing up.  Then there were shoot outs and explosions and I started searching the local news affiliates and WCVB was streaming their coverage online.  The local news affiliates were right in the middle of the action and the quickly developing story was crazy.  Finally the national news started to pick up on the story, but if you were following twitter you could get the details at least fifteen minutes faster. (Although some of the details needed to be taken with a grain of salt)  Since many people in the Watertown neighborhood were shook awake from the gunfight, they were tweeting photos and the local news stations were retweeting them... Then half an hour later the national news networks would finally mentioned what was happening.  This is the first situation where I have seen Twitter and local news coverage win, hands down.  GREAT job especially to WCVB and Garrett Quinn (@GarrettQuinn) for getting the information out in real-time instead of 20-30 minutes later.  I ended up not falling asleep until after 5:30AM, but was back up a few hours later to see if there were any updates.

I got a little burnt out on the details during the late-morning and middle of the day because there was not a lot of action going on with the search.  The uncle and aunt were a nice change of pace compared to the stories of where they went to high school.  I was also worried that once it got dark that finding Suspect #2 was going to be next to impossible again because, let's be honest, you can't see much even with flashlights or flood lights.  At 5:30PM my weather got cut out of the news due to the FBI press conference.  When they announced that people could leave there homes I was a little saddened.  Until I read a tweet by Rob Nelson (@TVRobNelson) 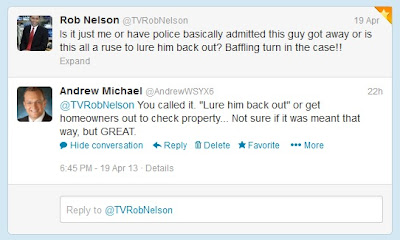 The police were a decent size force, but they don't know all the "odd" things on people's property.  So when Dave Henneberry went outside for a smoke, once the curfew was lifted, he noticed something odd.  One of his straps on his boat cover was hanging loose.  Then the manhunt heated up!  I was on my lunch break at home when the national news affiliates (who were there on the scene) mentioned the few dozen shots fired.  Here is the RAW video:
The law enforcement had Broadcastify take down the scanner feed because people were tweeting the scanner traffic.  I did find a UStream of someone streaming video of their police scanner.  I think by that time everyone knew not to tweet about what was going on and the police were VERY vigilant not to release any big details on the radio.  It was crazy to read the tweets from reporters on the scene, listen to the scanner, and watch the entire event unfold... It is, also, amazing how social media played a part in the entire search. The entire joint effort was impressive and hopefully they can bring justice to such a cruel and heartless crime. 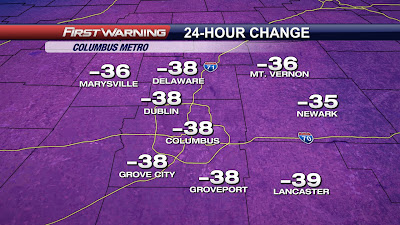 Switching gears to weather... So it is cold again!  Our temperatures were about forty degrees colder Friday afternoon compared to Thursday when we reached 86. 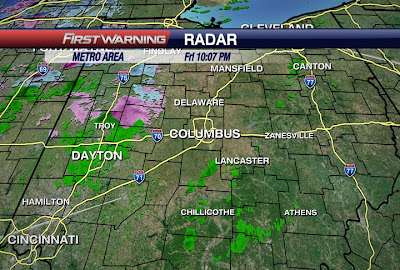 Temps kept falling and by the evening we had pockets of air cold enough to support snow falling down to the surface. 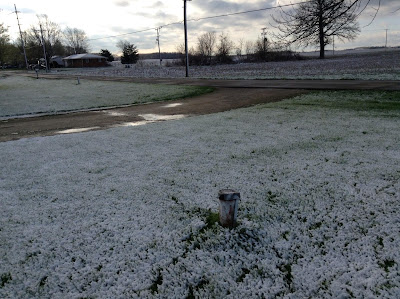 My dad emailed me from Western Ohio and said the ground was covered in snow and one of their neighbors sent me a photo of the snowy ground.  Thanks Teri! 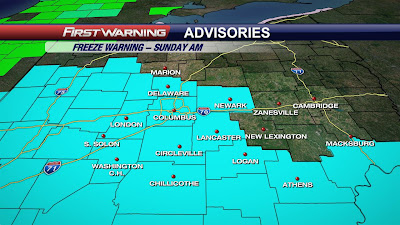 And as if things were not cold enough already... we have a Freeze Warning for most of the viewing area.  The counties that are NOT part of the freeze warning are not in the "growing season" according to the National Weather Service, so they do not have a warning... but it will be just as cold there.

So cold start to Sunday then the sunshine will help us warm back into the upper 50's.  More sun on Monday with a few clouds and mid 60's and then low 70's Tuesday for the high with rain arriving Tuesday night.  Not looking at anything severe Tuesday night into Wednesday morning, but could pick up another quick half an inch of rain.  We cool off a little bit into the mid 50's for the middle of the week and then a few more rounds of rain.  A weak system later Thursday and then a more impressive dose of wet weather for next weekend.  Either way... not too bad and no more snow in the forecast.  Have a good one!