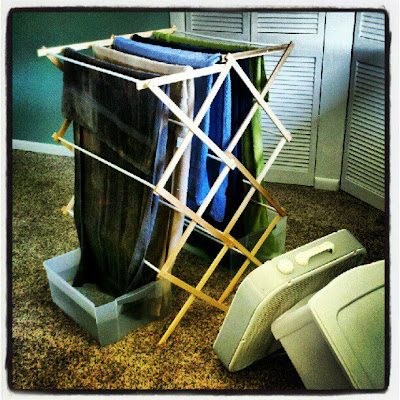 As you found out in yesterday's blog... my air conditioner bit the dust. The house was toasty all night Tuesday night and I woke up in a pool of sweat. Nasty, I know. One of the camera operators at the television station was talking about a swamp cooler when he was in the Air Force back in the 70's. They make highly energy efficient units now, but the basic way it works... Evaporation uses energy, meaning that it actually cools off the air. If you can expedite the drying process... without adding heat, then you can cool the air. I set up two drying racks, two tubs of water, fan, and five towels. I soaked the towels and hung them in front of the fan, which was put on the High setting. The air could cut through the towels and surprisingly it worked. The room was facing the sun and normally would warm up quickly. The temperature dropped two degrees in about thirty minutes, but then, after a couple hours, the rest of the house slowly warmed up and my single unit couldn't compete with the heating. I think there are a few ways to make it more efficient if I ever want to make another(The air conditioner was replaced in the afternoon yesterday). I think the wet air needs to be pulled THROUGH the fan... not air pushing through the towels. This would mean that the area behind the fan needs to be completely covered (with a breathable, dampened material) so the moisture will be pulled away. I also think I would need a stronger fan that is belt driven. The more moving air, the faster it would pull the moisture away. The belt driven fan would be to keep moisture from getting into the motor and thus keeping the motor from getting a short due to the moisture. The material could be kept moist by taking the top of it (leave some material overlapping the top of the fan) and dip it in a tub of water and the water will naturally want to flow to the lower part in the material by gravity...keeping it moist. Just a thought for next time, but I was surprised that it did work... until the rest of the house took over. At least I had a room that was cooler than the rest.

Looks like record breaking temperatures on the way. Today the record is 107 and I am calling for a high of 100, so no record today. We could see an isolated shower or storm again, but then tomorrow we should stay dry with a high of 101 and then 102 for Saturday...if we stay dry. The record for Friday and Saturday is 100. If there is any rain at the airport or very close to it then it will cool the temperatures off enough to not reach the 100 mark. The excessive heat warning is now in effect through Saturday for all of the Miami Valley. A better chance for rain Sunday as a cold front swings through and then cooling us off in the mid 80's for highs next week...looking forward to it. Stay warm and have a good one.