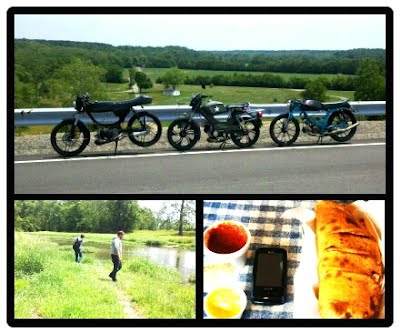 Since I was not able to go on the ride Monday night for Moped Monday, a couple of the guys who had Tuesday off work asked if I wanted to ride... Of course! It bums me out sometimes that I have to go to bed so early for work from 2:30-10:30AM, but at least I often have my day free. I LOVE riding out to Germantown Dam and that is what we have tentatively planned for our Sunday ride for our moped rally this fall. The three of us set off for Germantown yesterday. My bike was running really bad, especially on the hills. It kept bogging down and I was losing power. I ended up getting the bike running on flats and kept it booking into Germantown. I pulled on the throttle when we got to Captain 9's and it bogged and died...jetted too high. The bike was jetted for much cooler temperatures so the low 80's was running rich. I tossed in a lower jet in the PHBG carburetor and I was golden the rest of the day. For our Sunday ride we needed a place for a brunch. I talked to a co-worker who lives in Germantown and they recommended Captain 9's because you get a lot of food for a very reasonable price...especially the calzones. The calzone was bigger than my head practically. Very delicious food in a firefighters dream diner. There is tons of memorabilia from local fire departments.

After eating, I down-jetted and we were back on the road. We rode our mopeds around the surrounding areas around Germantown. They have a lot of winding roads that are a lot of fun for a two wheeled vehicle. Most of the roads are too windy for high speeds with also caters to mopeds because traffic will not come flying pass. We spent a little time at the bottom of the dam skipping rocks and exploring a few hiking trails. On our way back home there was a Porsche that came out of nowhere from behind us on one of the roads. He had to be going at least 65 on this winding road and barely missed the three of us in a single file. Risks of the road I guess... good thing we all wear our helmets. One of the guys blew up his cylinder and piston when we were almost home. The wrist pin clip broke off at the very end and got jammed. It is such a cheap part in the motor, but I have seen this fifty cent piece ruin a lot of bikes. He said he already has a new cylinder and piston on the way, but when I picked him and the bike up (after I rode home and got my truck) I could tell he was bummed. I have been there...well not THAT bad, but it is a very depressing feeling. Other than that...a great day.

Going right along with the great day...the weather. Temperatures will only top out in the upper 70's today with low humidity and plenty of sunshine after the fog burns off. Low 70's for tomorrow with rain arriving later in the day. The showers and storms will bring a decent amount of rain for late Thursday and Friday. Highs only in the upper 60's for Friday and Saturday and we still could see a lingering shower or two over the weekend, but most of us should remain dry. Temps slowly climb back up heading into next week, but not too fast. I already have the windows open to the house and look forward to the low humidity and cooler temperatures. Have a good one!