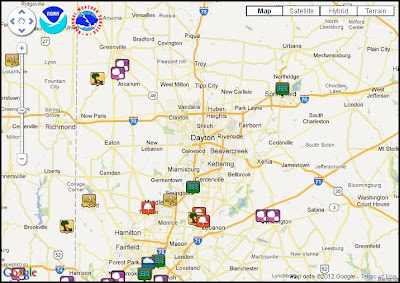 The storms came strong and fierce and they left the same way. The timing of the system was right on cue with what I posted yesterday morning..near or just after the evening commute. Butler County had a Tornado Warning issued at 5:30 and the tornado warnings continued as that storm moved the east through Warren and Clinton Counties until all the warnings wrapped up at 7:00PM. There were several reports of a funnel and only one house just to the northwest of Lebanon sustained minor damage. Belongings were thrown around the property and one of the walls to the house was dislodged and the structure is no longer safe for anyone to enter the home. The National Weather Service office out of Wilmington will survey the damage later today to confirm the possible tornado or rule it as straight line winds. Most of the storms that had severe hail was around 1" in diameter for the large storms, but one report from Darke County had hail reported to be golf ball size, which is 1.75". Luckily all damage from the storms was minor and no injuries to report for the Miami Valley.

As of 5AM, the storms are already pushing east of Columbus so we will be remaining dry for the rest of the morning... well, a little damp still from the storms. This afternoon and tomorrow afternoon we can't rule out the slight chance for a spotty shower, but most of us will be remaining dry. Dry, but WARM. We are expected to get to 84 today and 86 for the high tomorrow. Add in the moisture and humidity from the storms and strong Southwesterly winds... it will feel closer to 90 with the HEAT INDEX. First time this year we have talked about the heat index. More storms arrive Friday into early Saturday and that will cool us back into the 70's for the weekend and a little drier and less humid. Temps will stay in the mid-lower 70's for early next week as well, so if you like the heat... get out there the next few days. Stay cool and have a good one!