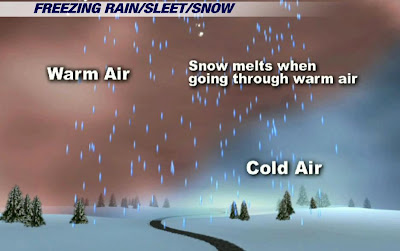 Running a little behind this morning due to the tricky forecast and spending a lot more time dissecting the forecast models and building extra graphics for yesterday's snow and the snow/wintry mix of weather on the way later today and tonight. As far as yesterday's snow we had a few heavy bands of snow move through between I-70 and US36 and they saw between 1-2". North of there was around 1" and then the further South of I-70 you went the less you would see. Aight, on to what is on the way...

Snow will roll into the area in the late afternoon today and your evening commute could have a light coating of snow already. Snow will continue into the evening hours and warm air will work in from the south. The warm air will be in the upper atmosphere so it will melt the snow as it falls, but then the cold air at the surface will refreeze it into sleet...small ice pellets. This switch will take place just after the evening commute depending on where you live. Warmer air will continue to try to push into the area and that will mean that the rain will not be able to refreeze into sleet and fall as rain, but with temperatures at the surface below freezing we will see it freeze on contact...freezing rain. The warmer air will not affect the north as much as it will affect the south. The south will see the most icing and the least amount of snow...up to 1". The central parts of the Miami Valley will see about 1-2" of snow and a little less icing compared to the south. Then the far north will see the least amount of icing and will be dealing with more snow, 1-3+". It should all wrap up around daybreak tomorrow and then just remaining below freezing all day Saturday.

I will say this... this system is the one that you want to WAIT to shovel the driveway or sidewalk until tomorrow. Any snow under the layer of ice you can just break through and then easily remove the ice. If you shovel the snow tonight and then the ice freezes directly on the pavement then you will have a tough time trying to get it off. I dunno about you, but I am waiting to shovel until tomorrow morning when it is all out of here.

Saturday will be a mess on the roads because we look to remain below freezing all day long, but Sunday we will get into the mid 40's with rain for Monday and temperatures falling through the 40's through the day and mild temps in the 40's for next week... I am pretty sure a lot of people are looking forward to the 40's with the weather we have been seeing.