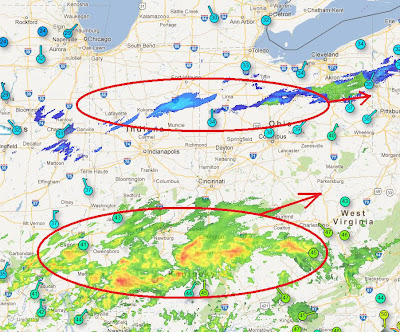 Today's high has was 49 in Columbus which was a couple degrees warmer than expected in yesterday's blog.  The skies stayed clear this evening for a little bit which helped us cool off some though.  So at 10PM there is a light band of snow across Northern Indiana and Ohio moving Eastnortheast.  The real moisture is to the south moving to the Northeast, but much warmer in the lower 40's and falling as rain.  We need the temps to drop and the dry gap to fill in more for any decent snow, but at this point I think a dusting is possible across part of the area, but not for everyone.  The fact that two "moist" masses of air are somewhat colliding will mean we will squeeze a little more moisture out... kinda like wringing a washcloth... but again, we got to have that temp fall faster.  Most of this will be off to our east by daybreak.

It would almost be like paint drying to watch the temperatures fall, but the rain/snow mix will last longer to the south meaning less sticking snow.  The north may have a little dusting as well as Central Ohio along I-70.  Regardless leaving a couple minutes early tomorrow might not be a bad idea.... not because YOU are a bad driver, but the idiot who didn't watch the weather or read my blog (sarcastic voice) will likely spin out when trying to drive too fast.  Disclaimer: I do not want anyone to get hurt or any accidents to occur.

So after this kicks out of here tomorrow we begin a warming trend.  Still cold tomorrow but by the weekend we may be pushing 60.  We also stay dry after tonight until week's end.  A couple of disturbances this weekend that I am not impressed with, but I will keep you posted.  Have a good one!