More Rain On The Way

Thursday was such a beautiful day it was hard for me to stay inside. Instead I was outside as much as possible, despite feeling horribly sick...but I was sick for a good reason.

In my last entry on Tuesday I mentioned how dangerous the weather was likely to be Tuesday night. Well sure enough we had two tornadoes. The storms were not expected until after midnight and I was able to go to the Reds game, thanks for the tickets sis. It is always fun going to watch the Reds, even if they do lose. Well after the game Dawn and I hurried home, I geared up into the station vehicle, and hit the road. I started north when a tornado warning was issued for Mercer and Auglaize Counties. I arrive into Celina shortly after the storm came through and before some of the local city workers arrive to stop traffic. There was damage like I have never seen in the Miami Valley for several years. Cars were tossed like toys, advertisement signs leveled as if a giant stepped on them, and sides of buildings torn apart to mimic a bomb going off next to it.

Just as I was leaving they had started turning on the lights at the Walmart and other local fire departments were showing up with generator lights to light up intersections and such. The more lights that were turned on, the more devastating images started popping up. I also stopped by a country road that was upstream of the damage and found a few houses torn apart and talked with a few of the people... everyone was devastated, but at least there were no injuries. This is why a weather radio is so important... you can set the alarm to go off when storms like this roll in, and you will be able to get to cover. I pray that everyone will recover from the tornadoes and realize how lucky they are to have no injuries.

After getting video for that, I booked it back to the station and reported for the morning shows and then came home and went to bed after being up for about 32 hours. I slept most of the day on Wednesday until Dawn came home and woke me up. Yesterday was nice and sunny meaning two things.... mow and not sit inside. I felt pretty sick, I am sure from walking around soaked in the rain in Mercer County with the tornadoes. I did finish working on my moped last night. I changed the wheels and handlebars while putting on a new magnum dashboard with ignition switch. 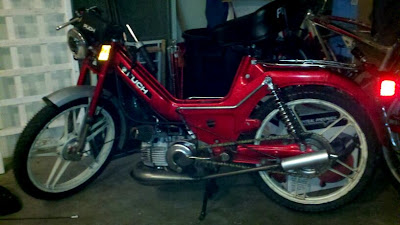 Anyway on to the forecast: Lots of rain is headed to the area. We are already very saturated from Tuesday/Wednesdays storms. We could easily see 2"-3" of rain over the weekend and some places could see up to 5" if they are where the rain keeps training, back-building. We have a slight chance for severe weather, so stay on your toes. We have the chance to see rain almost every day through the middle of next week. Temps will be in the 60's for highs, so at least it will be mild. Watch out for flooding and have a good one!