A Bit About Buckeye....and the Forecast. 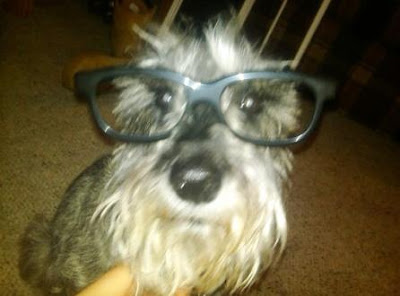 Buckeye has to be the best dog in the world...seriously. When Dawn moved in with me about to two and a half years ago there was one stipulation...Buckeye was coming. She was living with her parents and working in Cleveland and she moved in with me to better our relationship and I love her the world over for doing that. Her parents worked and her brother was at college so no one could check in on him through the day...so he had to come. However, I was not really a dog person. I remember seeing the back of our family's dog's throat once after pestering it a little.(I know my fault.) I could stand dogs, but really had no desire to live with a dog inside the house. Too bad, he was coming. I completely regret having any reservations about the pup since.

Buckeye is currently 9, I think...maybe 8, but his birthday is this August. He has had cataracts since birth. He was taken to the vet shortly after the family got him wondering why he couldn't see very well and he has basically been nearly blind since birth. He can see things out of the far corner of his eye occasionally and when a bright object catches him off guard he will jump back. For the most part he remembers where everything is inside the house, and unless I get him hyper he never bumps into anything. He also has a tumor on his back near his tail. It is a bulge a little larger than a golf ball, but it is non-cancerous. His real name is Buckeye Butler, but sometimes we like to call him Flawless.

Buckeye loves to sleep. He loves to feel the warmth of someone who has just left the bed. Sometimes he will know you got up, and when you come back he will be sleeping on your pillow just to soak in as much warmth as possible. When he gets super comfortable he will sometimes roll onto his back during a deep dream and occasionally paw at the open air.

Something that only happens on occasion is Buckeye howling along with a fire truck. He will only do it to the long high pitch that slowly drops over a 20-30 second period. At first it would normally only be in the spring or fall when the windows were open and he could howl along and try to mimic the sound of the siren. Dawn and I have tried making the sound ourselves and have gotten him to start howling along. Afterward, we always tell him how good of a dog he is...if the house ever catches fire and we are sleeping, at least he will howl as the firetruck is rolling up the street.

Another thing that Buckeye loves more than his dog treats is being outside or in the car. He loves sitting in the car and I often wonder if he wonders where the next trip will take him. I probably take him in my truck too often, but I know he likes taking trips to run errands. He loves putting his head out the window and often the cut-off is about 40 miles per hour. I will say that one of my favorite pictures of him was when I lived in Lima. After my last TV station was bought out, I had a month of so of waiting until my next job. I was particularly depressed during this time and often found myself wanting to be outside in the sunshine. Of course Buckeye would want to be out there all day as well. I remember sitting on the front steps of the apartment in the warm sun with a million questions flying through my head...but Buckeye... not a care in the world. He put his front two legs on the next step down, sat on his back legs and would turn his head as each car passed the steps...soaking in the sunshine. He could occasionally bark if a diesel truck passed or a bicycle rolled by and the pedals were going reverse so you get the ching-ching of the freewheel... he hates those sounds. He sat there loving every second being outside and just lived in the moment. It made me appreciate the small things in life and to be thankful for what I had at that very minute. I think he is the best dog in the world and I am thankful that my fiance decided to move in with me, and bring him along.

More rain for Monday, Tuesday, and Wednesday. Wednesday looks to be the heaviest of the rain and there is a slight chance every day for severe weather. Although it is a slim chance, make sure to be prepared. Maybe a few showers early Thursday with cooler temps in the 50's, but at least clearing skies will finally try pushing into the area for the end of the week. Continue staying dry and have a good one!