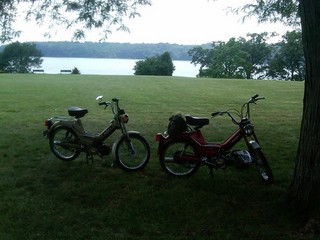 Well as I stated in my previous blog entry, I was planning a moped trip, and today it happened... All the way from my house to Hueston Woods State Park and back, 65 miles of open road...... Well it turned out that it was about 60 miles of open road... 5 miles were a one lane gravel back-road....

Before my brother arrived, I had to somehow fix my pedal situation, the threading on my left pedal had warn smooth, so as a quick fix I tried using JB Weld and hoped it would hold it in after 90 minutes of drying, but just to give it some extr a time, I planned on riding with my feet up on the frame in order to not add any extra stress. I had plenty of pedals, so I grabbed an old one and secured it into the pedal arm and after a test, it was holding nicely....

Bryant, my brother, arrived around 11:45 and we hit the road at 12:00. I let him take my 1.5 HP Puch Maxi and I took the 2 HP Puch Maxi because I am (cough) fatter and I was taking about 20 lbs of water bottles and tools. Keep in mind the heat index was close to 100 all day long, so if we got stranded water would be a necessity. The tools...well just hang on... Anyway we hit the road and it was very apparent he didn't r ide mopeds on a normal basis, he was hugging the side of the road like a prom date.... I told him to scoot out, and by law we got three feet from the curb. PLUS, if some crazy "mean person" passes when they shouldn't or how they shouldn't and you could reach over and knock off their passenger mirror (no it hasn't happened, yet), but if they get to close, you got a buffer area to slide over and not have to throw yourself and MY bike into the ditch. So we rode on and got about 4 miles away from home when his moped died, it seemed that it was getting too much air and not enough fuel so I opened up the carburetor and noticed some sediment from residing rust flakes in the fuel tank. I cleaned the carb, put it all back together and it ran as good as new. I have to admit I was afraid it was going to be a really short trip and I would have had to retur n home to get the truck to pick him up, but not just yet, we continued....

Well the JB Weld didn't hold and my left pedal fell off sometime at this point, but I didnt care, I had my feet up on the frame and was loving every second....pedals, we don't need no stinking pedals, and on we went past cows, chickens, and corn.....

We took Manning Rd which is a fairly hilly road with some steep grades until it T-boned into a river. At this point I noticed a shortcut on Old Gratis Rd. (Well Google Maps gave me the hint the night before) So, before I got there, I had no idea the word "Old" really meant it, the bridge to cross the river was sheets of metal that were held up only by a few rusted beams. We got across the river only to find gravel, potholes, and pudd les. Riding a moped, the last thing you want is potholes because some of them can swallow a moped whole, and to be hidden by puddles.... well it was an interesting few miles... We rode along the dried up river bed (how there were puddles and hardly a drop of water in the river I will never know), but we came out of the road dirty and the mopeds acting up from all the jostling. After a quick break we continued on our way with no hick-ups for a while... Then after about ten miles, I did notice my rear tire was starting to lose some air, so I opened up the throttle and pulled ahead so I could pull over and add more air and Bryant could catch up. A little air and we continued to Camden, Ohio. We fueled up because I had been riding the mopeds a lot and hadn't fueled them up in a few weeks, so they were getting a little thirsty.(Only took about $2.35 to fuel up both bikes) From Camden on to Hueston Woods we were golden, hilly roads and smiles all around. We finally arrived after about two hours and 32.5 out of the 65 miles were complete.

We visited with my family and I also cleaned the carb on my bike because at full throttle it started bogging down and acting funny. After our quick hi, congrats, and goodbye we started heading back out. Bryant's rear tire was low so we filled it up, back onto the road and my freshly cleaned carb did the trick and I was "blasting" the hills once again.(Well 28 mph isn't blasing, but when you are all alone in the country, I will take it) We got about ten more miles and then realized that Bryant's tire started getting flat again. Luckily when I went to get more JB Weld this morning I stopped by my friends car dealership, Fox Motors, and got a can of "Fix-a-flat" We sprayed that into his tire and it seemed to be holding air once again. The bad part was the foam that was inserted fused the can's hose to the tire valve. We had a heck of a time with our foamy, sticky fingers trying to get it off, Bryant even proceeded to burn his hand on the muffler, but eventually it was off.

We were now at the 40 miles into the trip and 25 left to finish. We made it another 5 miles before we had to repeat the "Fix-a-flat" nonsense. We were hoping the foam would fill the leak, but no dice. After another 8 miles we repeated it again. And then two miles after that the tire was completely flat and even using my mini bike pump, we realized the tire was dead, only 10 miles left in the 65 mile trip.... I normally carry an extra tube, but I completely forgot today. Well at this point all I could do was finish.

I have been to several moped rallies and my bike has never finished the long ride (normally 25-35 miles), and I was determined to finish the day's 65 mile challenge. Bryant stayed to try pumping up the tire, and I opened up the throttle and finished the last ten miles with one pedal fully determined, knowing that I had to get my truck to retrieve my brother and daily rider. I rolled into home just as my fiancee was getting home from work, so she hopped in the truck and we picked him up.... I am so happy to have finished the trip with no mechanical fatalities.... only a blown tire..... So a combined 120 miles on my mopeds in 100 degree heat....complete day.

Lessons learned(new or reiterated):
1. Riding in a group always beats riding alone.
2. The tires were old and nasty, shoulda had new tubes and tires before the long haul.
3. Mopeds are awesome.