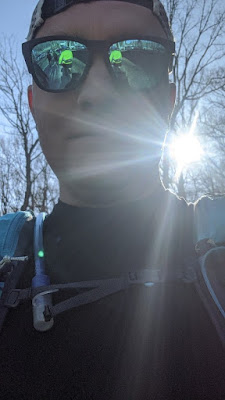 Lot to unpack here from the past few days.  Had a GREAT weekend full of challenges.  This photo is from just before the start of the Vertical Mile "race" on Saturday at Camp Nuhop in the Mohican wilderness.  More on that shortly. 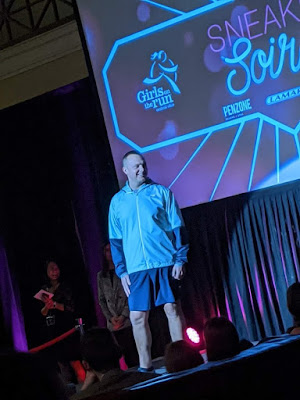 Before that... I was asked to take part in the Sneaker Soiree on Friday for the Girls on The Run.  They raise money to get shoes for young girls so that way they are running in proper footwear for running.  The event was great, but I had to borrow my niece's car because when I tried leaving the house mine would not start.  I fixed that on Sunday...  The Sneaker Soiree was great and it was awesome to catch up with friends there and help raise money for a great cause. 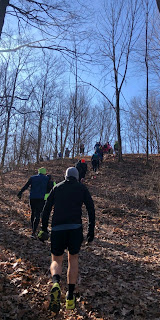 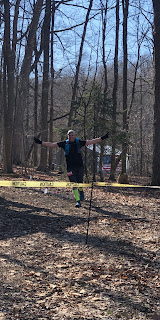 Saturday was the Vertical Mile.  So you had to run enough to get at least a mile, 5280 feet, of vertical gain.  So the race was about 18 miles flat, but this course was anything but flat.  It was 18 miles and one mile straight up.  These photos were taken by my buddy Tony who also ran hills with us.  Pretty small event with only about 120 people.  But SO fun and so challenging. 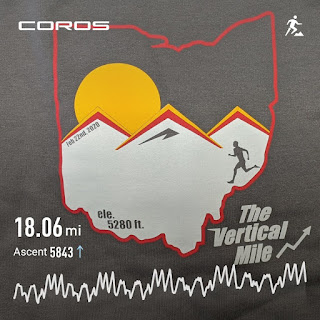 This is a shot of the hoodie logo and the elevation map on top of the hoodie.  It was a five loop course so you can see how we ran the hills multiple times.  Those tight three hills were brutal.  It was a 25% incline.  It was ok when you were on switchbacks, but the first time up the hill was straight up and it felt more like stairs, but with rocks, sticks, mud, and muck.  The last loop was a mental challenge because I already passed the 5280 foot mark, but I still had to finish it to get the full five loops.  Buckled down and got it done.  I like going into those dark mental areas with distance/trail running and working through it because it is only temporary.  Just have to buckle down and have relentless forward progress. 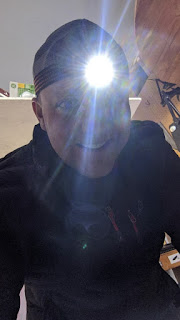 Alright... Sunday was family day and fixing the car day... 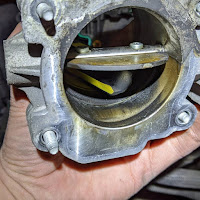 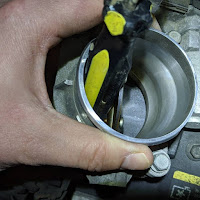 I took off the throttle assembly on my wife's 2009 Pontiac G6.  You can clearly see how dirty it was on the left photo and then what it looked like when I cleaned it up on the right. Just had to go through the idle relearn procedure and all set! Glad I did it on Sunday... 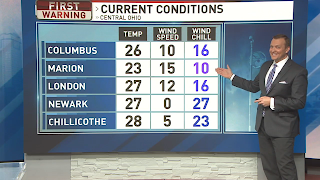 Because it's been cold!  Thankfully rain most of the day today and yesterday.  That changes tomorrow... 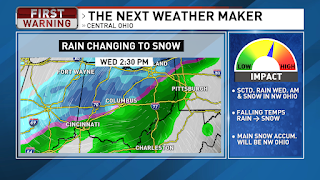 We are going to transition from rain to snow tomorrow. 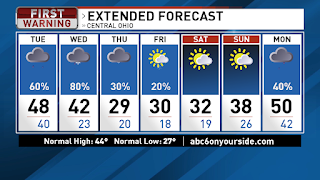 Keep the rain gear handy!  Today we will have on and off light rain showers with temps starting out around 40 and warming into the upper 40s.  The rain will be intermittent through the day and tonight as well with overnight low temps around 40.  A cold front will swing through early tomorrow and cause our temps to fall.  So we will have scattered rain showers in the morning for Central Ohio and Northwest Ohio will be colder for scattered snow showers for the morning.  The transition from scattered rain to scattered snow will occur slowly through the day and then by tomorrow night the snow will wrap up and be moving out of here.  So there may be some light snow accumulations for the Northwestern part of our viewing area during the day tomorrow with some additional light snow Wednesday night. 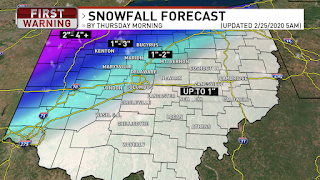 Snowfall totals on Thursday morning will be 2"-4"+ for far Northwestern Ohio.  1"-3" for northwestern parts of the Central Ohio viewing area.  Around 1" possible for the I-71 corridor and then up to 1" for Southern and Eastern Ohio by Thursday morning. By Thursday and Friday we will be much colder with some flurries and high temps around 30. The models have backed off on the flurries and snow, so I did drop the chance of precip just a tad.  The weekend is looking dry and cold with partly cloudy skies and highs in the 30s.  We see a surge of warm air for the first part of next week with more rain returning.  Have a good one!