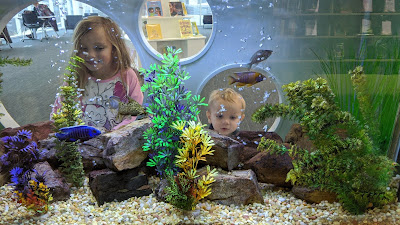 The past week has been wet and chilly, so I have been keeping the kids busy inside.  Earlier in the week we went to the library to read some books and explore. 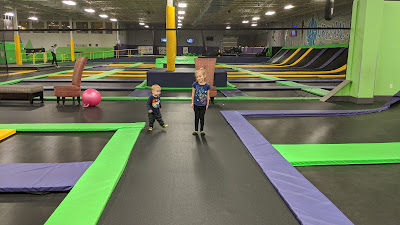 We also went to the trampoline park.  Evan watches and is too timid to jump on the trampolines, but he will get there eventually. Summer had a blast and we had the entire place to ourselves while the older kids were still in school.  I cherish my time with the kids because once they get older and in school then days like these will be few and far between.  I am very lucky to work the early morning shift and spend the rest of the day with them. 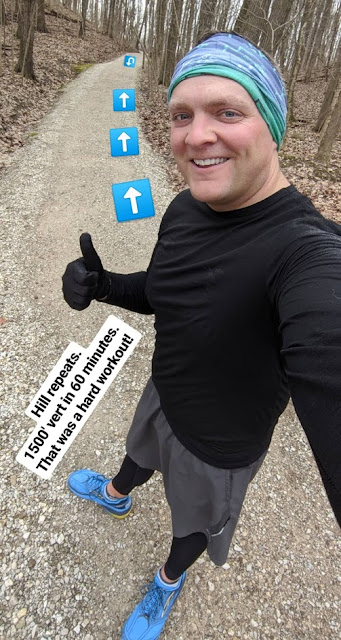 I do enjoy the short time I DO get without the kids during the week.  Evan naps in the morning while Dawn is working and Summer is at preschool.  So I hit up the Metro Park near Summer's school and try to get as much running as I can in, until it is time for pick-up. People ask why I like running so much. Each run is unique, but you can push yourself to try to do better than the last run.  Or some runs you just get to take it easy and enjoy the sights and sounds of the outdoors. 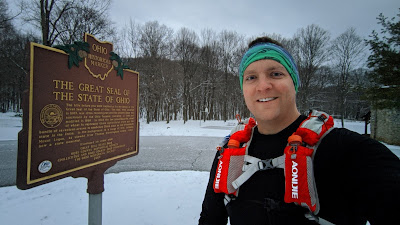 Saturday was a GREAT day to enjoy the outdoors.  A friend of mine was planning on running Great Seal State Park and he invited me.  He picked me up at 6AM for the run. 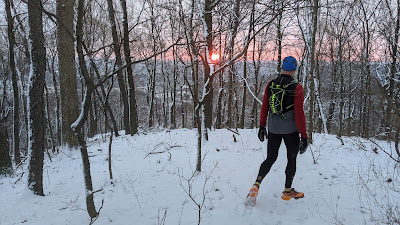 We climbed the first mountain, Sugarloaf Moutain, and it was a cloudy morning.  There was a thin sliver of a break in the clouds on the eastern horizon.  It was very serendipitous to reach the top of Sugarloaf to see the sunrise. It was only out a couple minutes then it went away for the rest of the day and we picked up a couple inches of new snow. 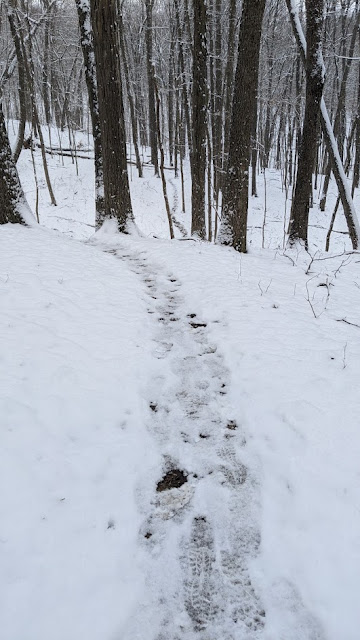 The trails were slippery from the snow, but under the snow it was not frozen.  The 3 days in the 60s last weekend turned the frozen ground into mud.  So if you stayed all snow then you had decent grip, but once the snow gave way then it was slippery due to mud.  We ended up with 18 miles with almost 4,000 ft of vertical gain.  It was less miles and slower than we anticipated, but we were moving the entire 5+ hours.  Good training for sketchy conditions.  Glad to be there with someone else and thankfully we stayed upright for the most of the time. Sunday was a fun day at home. Summer and I played in the snow when it warmed up and the snow was pack-able. 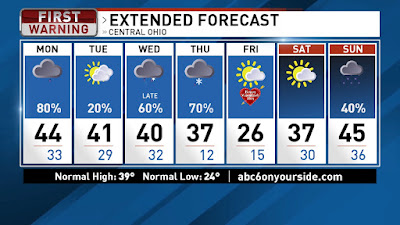 Starting the workweek with rain & chilly temps, but at least we are warm enough for wet roads instead of icy or snowy roads.  Temps will hold steady in the lower 40s all day long today with rain showers on and off for the morning.  By the afternoon the rain will shift into Southern Ohio and be scattered with roads starting to dry out.  Tonight we will fall into the lower 40s so there is a chance of a wintry mix and even some light snow for Southern Ohio, since the precip will still be to the south.  The wintry mix to the south kicks out quick tomorrow then mostly cloudy with highs in the lower 40s.  So Tuesday will be a dry day for a lot of us with chilly temps. Wednesday we start dry then we have another system moving in from the southwest.  Right now it looks like it will arrive in the late afternoon and evening with highs around 40.  We will be very close to temps cold enough for this to be snow, but the current projections have us just a shade on the warmer side for the majority of the event.  So a little wintry mix to start then we warm to mostly rain for Central and Southern Ohio for Wednesday night.  Northern Ohio could see some accumulating snow overnight. Colder air will transition us back to light wintry mix and light snow on Thursday.  Light accumulations are possible, but we will need to get a solid lock on temps before we know how much snow we may see. MUCH colder air moves in for Thursday night, Friday, and Friday night.  A few models are going with single digit low temps.  We would need a light snow pack and clear skies for that, but right now it looks partly cloudy.  So I am going to go mid-low teens for lows right now and a high in the mid 20s on Friday for Valentine's Day.  We start warming into the 30s on Saturday and we could see more rain by next Sunday with temps in the 40s.  Have a good one!