Fun in the snow, frozen run, warmer temps on the horizon... 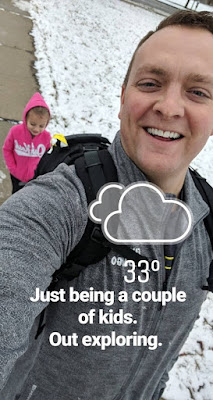 Maybe I should start rhyming the title to each blog.  Just a though...
Summer and I went to COSI yesterday to so some exploring.  We didn't stay outside too long, but it was nice to run around in the slushy snow.  Dawn took a break from work and brought Evan to join us for lunch.  The new superheros exhibit was really fun for the kids. 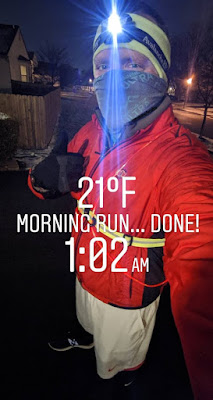 I was on the fence about doing a morning run today.  I LOVE running in adverse conditions.  I like to see where the cold "gets you" first.  But it was either wake up early and run before work and then nap when the kids nap... or sleep in a little and then run while the kids napped.  I opted for the early run.  I forgot to let my gloves dry out from my past run so they were clammy for the run, but once I got moving I warmed up pretty quick.  Fleece-lined leggings and fleece shirt under the wind shell made the run very manageable  I did use a buff on my face since the wind chill was in the single digits and the run was about 35 minutes.  Overall a decent morning run! And now I get to take a nap while the kids nap this afternoon! 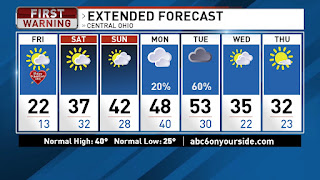 We are in for a VERY cold Valentine's Day!  Wind chills this morning are in the single digits and near zero at times.  We have mostly cloudy skies this morning with flurries and we will see more sunshine as we go through the day with partly cloudy skies.  Morning temps are in the mid teens and we will warm into the lower 20s for the coldest day of the season so far. It will be the coldest high temp we have had since March 5th, 2019.  We will be cold again tonight with mostly clear skies and low temps in the mid-low teens. The weekend is looking great for running errands, but a little on the chilly side.  We will be partly cloudy on Saturday with highs in the mid-upper 30s.  Mostly cloudy on Sunday with highs in the lower 40s.  There may be a sprinkle or flurry on Sunday as well. Monday will be even warmer with high temps in the upper 40s with cloudy skies.  Rain moves in Monday night.  Tuesday will be wet, but warm with high temps in the lower 50s then quickly falling temps.  Colder and drier air returns by the middle and end of next week with some sunshine returning. Have a good one!