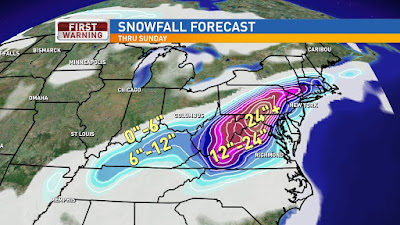 So Central Ohio is dodging a big bullet with this winter storm.  Portions of West Virginia, Virginia, Pennsylvania, and Maryland through the weekend will see a LOT of snow. 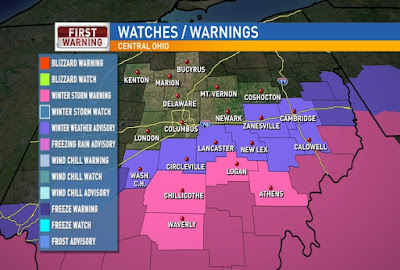 As of 7AM, here are the counties under a Winter Weather Advisory and Winter Storm Warning.  Columbus it not part of either.

Snow arrives midday today for Southern Ohio and will push into Central Ohio late afternoon/early evening.  Above is an animated image of the snow pushing in today starting at Noon and the showing it out of here by Noon tomorrow.  The Columbus metro will see the snow for only a handful of hours this evening, but Pike and Athens County will see the snow for hours on-end tonight and heavy at times. 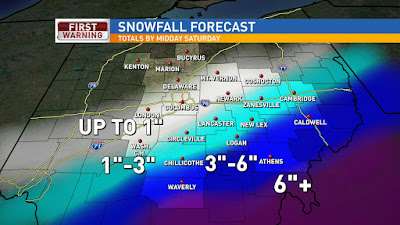 So here is the snowfall forecast that we have been using the last couple of days.  We have only made very very minor adjustments. 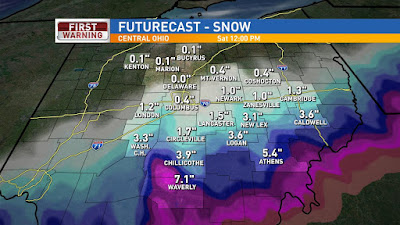 So taking a look at the RPM map that came out at 6AM today... We are right on with the RPM.  The RPM (our in-house model) is normally VERY accurate 24 out.  So I am really happy that we have stuck to our guns.  Now time will just tell... 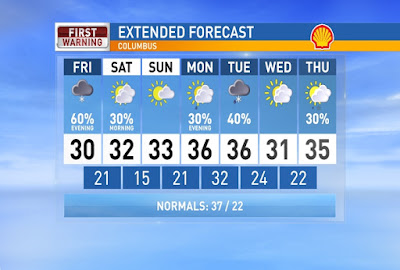 Today's forecast summary:  The track of the major winter storm for the Eastern United States is staying on course and Ohio will be on the very edge of the storm. Snowfall totals will vary greatly across Central/Southern Ohio. Columbus could see up an inch or so, but Pike or Athens county could see 3"-6"+ by midday Saturday with more farther south. Snow will start midday Friday for Southern Ohio and then move into the Columbus Metro around the evening commute. Snow will taper off for the Metro after midnight, but continue for South and Southeastern Ohio. By Saturday morning the snow will start moving out of Southern Ohio leaving us all mostly cloudy for most of the day with a little sun possible later in the day. Sunday looks dry and partly cloudy. Tracking rain and a wintry mix for early next week. Have a good one!