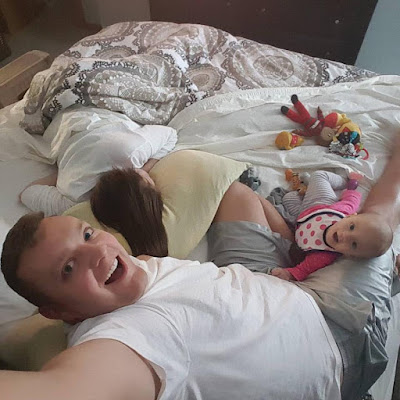 So I think I got Dawn and Summer sick.  They wouldn't take naps at the same time, so thankfully Summer was pretty happy once she woke up.

Snow is on the way! 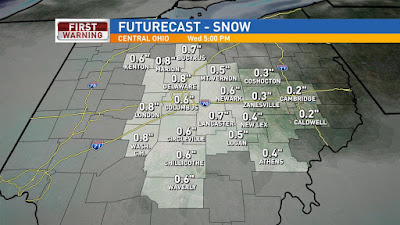 Here is the RPM's forecast of snow by 5PM today. I think it may be under-doing it just a tad, so you may want to add a little for the SW counties. 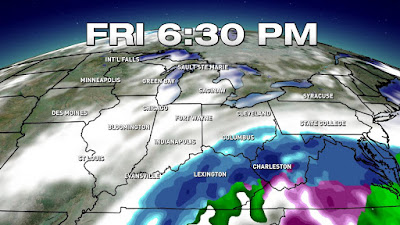 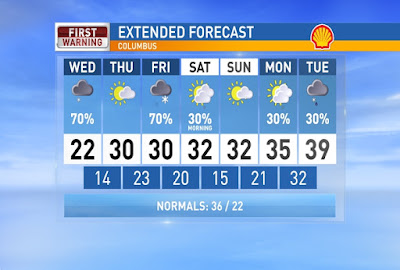 Before the map of snow, here's the extended forecast... Tracking a few winter systems on the way. Today we will see snow showers through the morning and midday, but the snow will be moving out by the afternoon and evening. Accumulations will be up to 1" across most of Central Ohio, with slightly higher totals possible in spots, mainly for Southern and Western Ohio. Tonight we see the clouds break up a little and staying partly cloudy Thursday. A major winter storm will hit the the Midwest and East Coast Friday and early Saturday. Central Ohio will be on the far Northern edge of the system so there will be a sharp cut off from little to no snow, to a lot of snow. The heaviest snow for the storm is still looking to track from Kentucky through West Virginia and up into Maryland. For Central Ohio, the snow will arrive midday Friday and be wrapping up by daybreak Saturday. 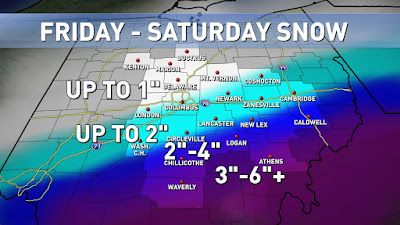 Most of Central Ohio could see up to 2". Southern and Eastern Ohio will see the most snow with Pike and Athens County potentially seeing 6"+. The forecast models are still disagreeing a little on the track of the storm, so stay tuned because a small shift in the storm could drastically change our snowfall forecast. Dry late Saturday and Sunday then a winter mix early next week. Have a good one!