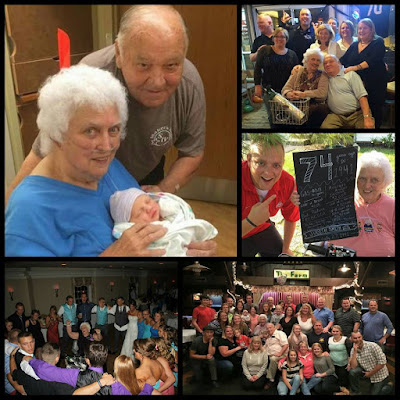 Just coming off the air on Friday my mom called me from home.  My Grandma Judy was moved to Hospice in Cincinnati and I knew my mom was there with Judy.  So when she called me from home, 90 minutes away, I knew it could not be good news.  Judy passed at 1:11AM on Friday morning.  We were so blessed to have the chance to visit her last week, talk with her, and say goodbye.  She was an amazing woman and always pushed the 22 grand kids to do more and try harder... or she would call us out.

As mentioned in my last blog entry, she had a rare lung condition that didn't allow much oxygen to get to her blood.  She had many tests and trials to see if there was anything modern medicine could do and there was nothing that could help her to completely fix the issue.  So she was on oxygen for the final ten or so years. She and Grandpa, Giles have seven kids, twenty-two grand kids, and two great grand kids. Mom said that on Thursday she shut her eyes around 10AM and didn't open them the rest of the day and the family knew the time was coming.  So now Summer Rain has a guardian angel.

Since she had the issue she knew she wanted to donate her body back to University of Cincinnati.  That is where she went to college and she wanted to give them the chance to find a cure for her condition.  So no viewing, no funeral, just a big party (her request) in a month.  Saturday the family got together for a brunch, and while it was a heavy atmosphere, it was great to be around the entire family.  My sister came down from Kent State to stay with Dawn and me this weekend.  She rode with us down to Cincinnati.  Grandpa came out and said goodbye to everyone one by one as they were leaving.  He has stayed strong, but when he breaks down so does everyone else around him.  He loves to travel and I hope to have him as a guest more often now.  When we got home to Columbus on Saturday night Amanda played a few voicemails from Grandma Judy.  It had Amanda, Dawn and me crying and laughing hysterically.  Judy was a funny one and always was concerned with others before herself.  Even in her final days she was concerned about the grand kids finishing school and "finding a nice man or woman".  Judy also loved reading this blog, but since my Grandpa doesn't get on the computer, I can fill you in on his/their Christmas gift.  A while ago he gave me old school video film from the 50s, 60s and 70s.  At home, with lots of time, I was able to digitize it.  I used a projector to shoot the film on a screen, then tape it with VHS, then hooked up the VHS to the computer and recorded it on the computer. 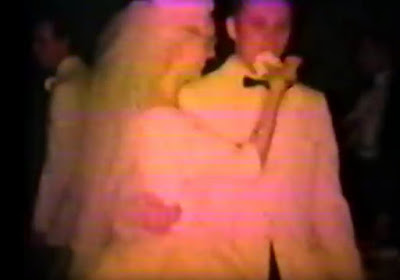 This is a still frame from their wedding.  The video has memories of their wedding, family vacations, the family at Christmas and so much more.  So I will be burning the 4.5 hours of film to a DVD and that will be his Christmas gift this year.  Judy... if you can log on to my computer from heaven... watch it whenever you want. 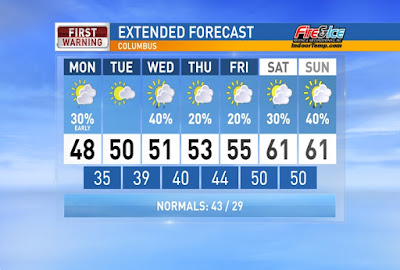 And since Grandma Judy would want things to roll on... Some spotty light morning rain for Monday, then mostly cloudy to partly cloudy tonight. Tuesday looks partly cloudy & dry, but starting off foggy in spots. A few rain showers return for Wednesday and some on and off light spotty showers possible through the rest of the week. Temperatures slowly climb up to the low 60s next weekend. Have a good one!