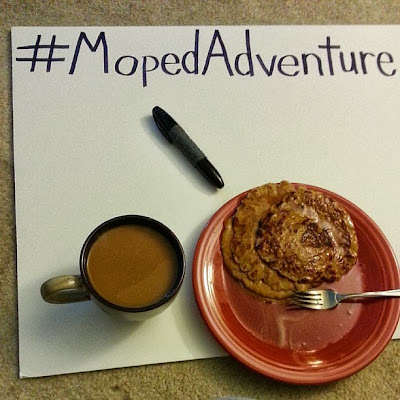 I mentioned how I had planned the 200 mile trip to ride my moped back to my parents' farm and back to Columbus.  Well I did it, and here are the pictures from the trip. 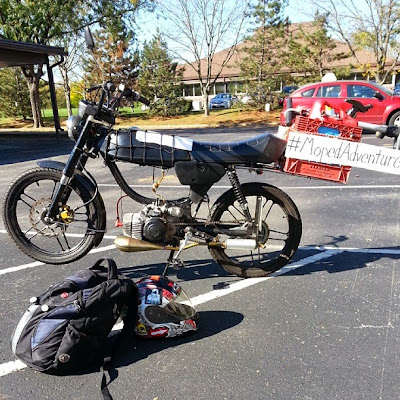 I got a little later start than expected, but made sure my bike was ready to rock for the trip. 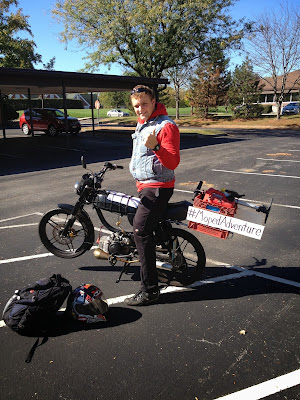 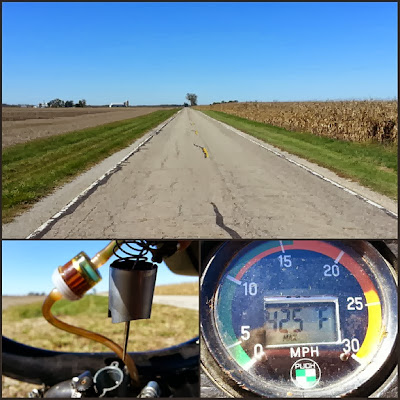 My bike was running pretty hot, so I raised the needle along side the road to help cool off my mid throttle positions.  I helped a little, but I was worried that my carb was getting dirty and that was why I was running so hot considering it was a cool fall day. 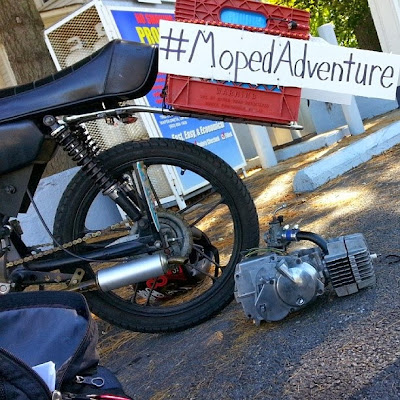 I stopped in Mechanicsburg to buy carb cleaner and then I noticed my rear rack.  I had over fifty pounds in it with my spare motor, fuel, and tools.  A lot of people question why I took a spare motor, but it would take less time to swap a motor than wait for someone to come get me.  Turns out, I didn't need it. 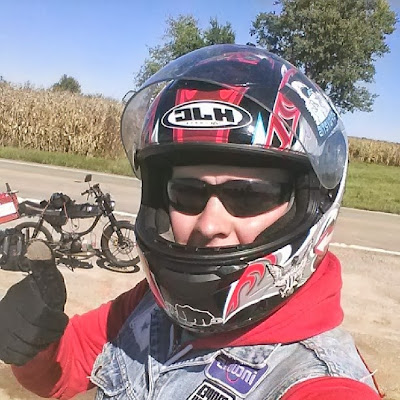 So I put all the tools in my backpack and strapped the motor to the front of my seat.  I had to straddle it, but at least I know it wasn't going anywhere.  I only had a few light items in my rack for the rest of the 60 miles back to my parents.  I also stopped and backed off of my timing to run cooler, worked some, but I was still able to get into the lower 400's at times. 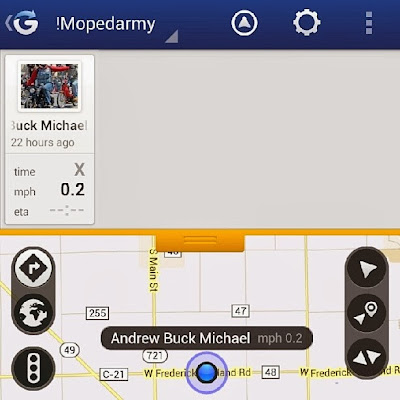 I was taking so long that my GPS on Glympse timed out and I had to reset it.  I had quite a few people tell me they were tracking me riding along. 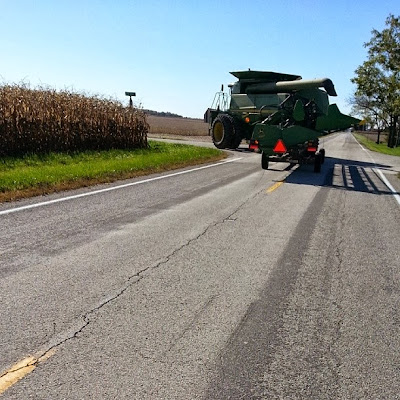 I did get frustrated at the farm machinery holding me up a times.  They didn't care to let me pass and there was no pavement to pass. 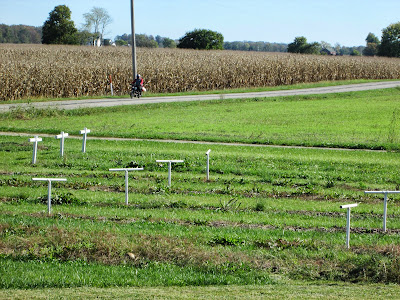 My mom snapped this photo when I was coming down their road. 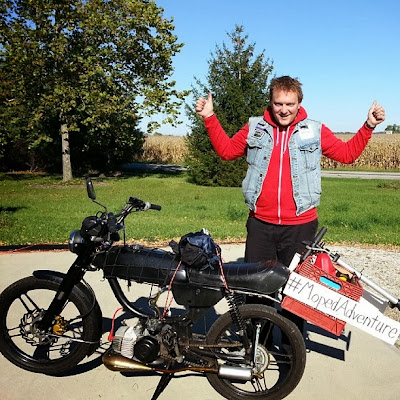 Made it halfway!  With all the roadside stops, I arrived in five hours at 4:10PM.  I was super excited to make the first 100 miles of the trip to my parents.  My mom had delicious food ready for me, but I couldn't rest for long. 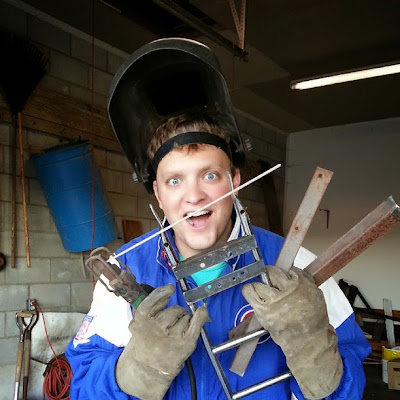 I have never welded before in my life.  I have helped others dozens of times when they welded.  My dad always used a stick welder on the farm and he still had his welder.  His vision isn't the best and he said he would not weld it for me.  So I found some angle iron and he taught me how to weld.  I practiced for a half an hour and I thought I had the feel of what to do. 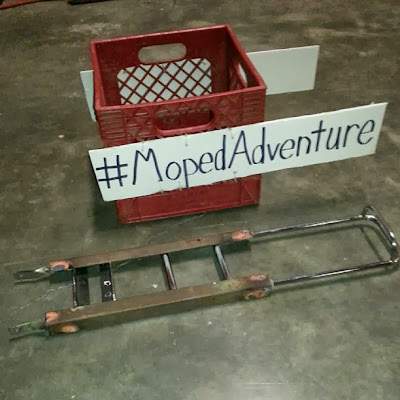 I managed to weld the angle iron to the rack and it looked pretty awesome.  I mounted the rack, but waited to mount the basket and weight until the morning. 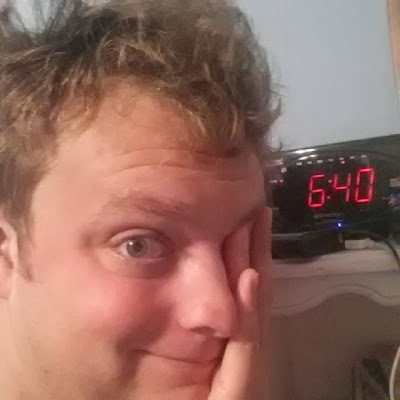 And morning came quick.  I stayed up a little and talked with my parents, but the rooster woke me up dark and early.   I was kinda hoping to sleep in, but my sister left for school around 7AM so I was glad to see her before she left. 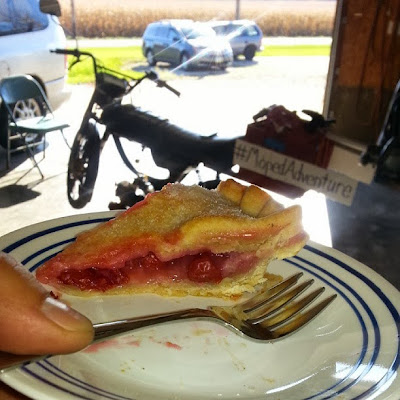 My mom made me finish the rest of the cherry pie before I left. 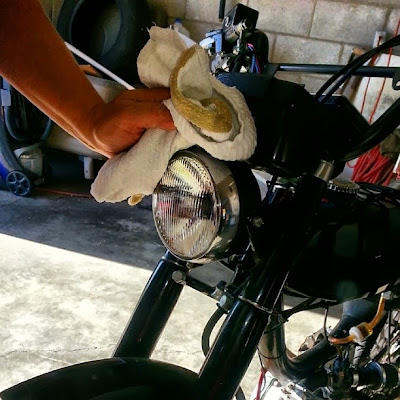 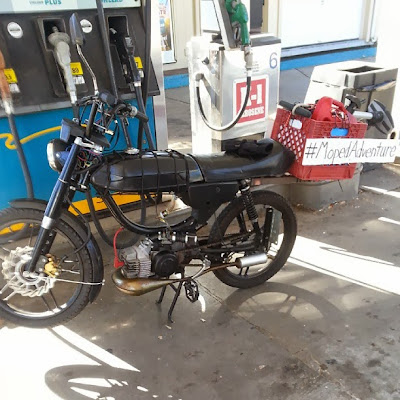 Upjetting did the trick.  I was running around 370° for almost the entire throttle range.  I still wanna upjet one more, but I think I have a very minor air leak because I was running an 84 jet for months(unless the 84 is not properly labeled).  Anyway, I stopped for gas in Troy and then I hauled tail. 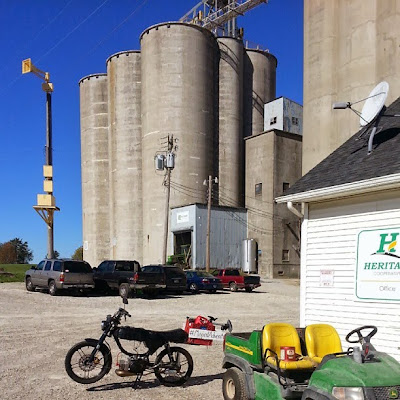 The only other stop I made was in a small town, Thackery. I was wondering how much the I weighed with the bike and gear so I stopped by their grain elevator and asked if they would weigh me.  They kinda chuckled and said sure... it was 480 lbs.  Not bad, but I was really taxing the motor for sure with all that weight. 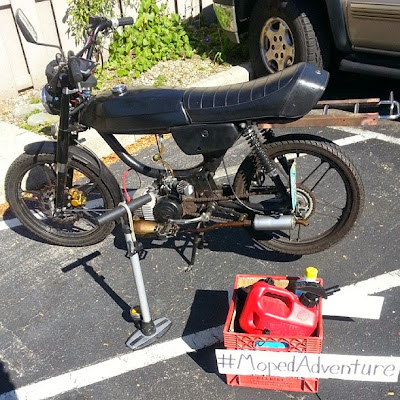 I pressed on and made it home with no issues.  200 miles and tons of smiles.  Route 55 east of Troy was my favorite... hills, curves, and beautiful.  Super glad I made the trip, but don't know if I will take a spare motor if I do it again.   I arrived at 1:50PM so I shaved off 100 minutes because I wasn't stopping and working on the bike.  Such a blast.  I liked the idea of the #MopedAdventure sign, but I think it would work better at a moped rally.  I wanted to post the sign so if someone took a photo of me then they would know what to use for the hashtag.  When I am riding solo on back roads through the country there isn't anyone to snap photos and upload them. Haha, but all for fun.  Now I need to paint that rack!

And as for the gas... I used 3 gallons for the entire 200 mile trip. Not too shabby!
As for the weather... a few spotty showers for Sunday, but most of the area will be staying dry.  Just a passing shower or two with a weak cold front.  We stay dry Monday and then a strong cold front brings rain for Tuesday night, Wednesday and possibly early Thursday.  Until then we stay mild with highs in the low to mid 70's. Then by the end of the week our highs will be staying in the 50's.  Back to the newscast, just wanted to share the photos from the journey.  Have a good one!