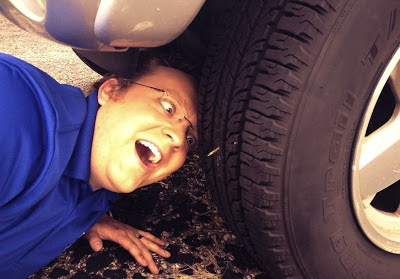 I call Adam Aaro as I am leaving for my LIVE shot, from the Creekside Blues and Jazz Festival in Gahanna, to tell him that his driver's side front tire is completely flat.  He had no idea. 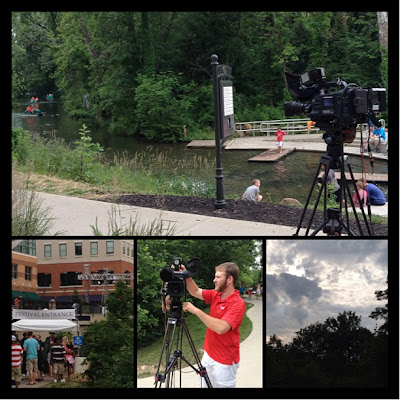 I went out and did my LIVE shot and only had one minor hick-up.  So I pull back into the station and I see Adam and Joe out there trying to take off a rounded lug nut on his tire.  I know they make a special nut to dig into that and chew into the lug nut to get it off, but that would involve more time.  Instead I crawled under to see what was causing the puncture and it was a screw in is tire... with the HEAD in the inside.  Not sure how THAT happens, but I went down to engineering and grabbed the air compressor and vise grips.  Then I went back out to my truck and got my plug kit.  It took some work to get the screw out, but I got it and plug the hole right back up.  Almost as good as new!  So yea... an average day. One other sidenote... Phil Kelly will be coming back to a television near you soon!   He dropped by the ABC6 station today to get a rundown of any changes since he has been here.  Today is my last weekend day for a while, until they find a replacement for Lisa Colbert.  Bill Kelly is off next week so I will be working for him for a week... THEN I will be working Lisa's shift until we are back to fully staffed.  We are really lucky to have Phil Kelly ready to go.  Such a nice guy.  So today is my last weekend day for a while.  I have not had a weekend off since August so I plan on enjoying them to the MAX!  I hate that it comes at the price that Lisa Colbert is leaving, but I am sure you will see her around.  And until the morning replacement is found... I plan on taking full advantage of my weekend off.

On to the forecast... Spotty showers and storms for Father's Day, but I think most of the day should be dry.  I would just keep an eye to the sky if you want to fire up the grill.  A few showers for Monday as well to start the workweek, but then we dry out and warm up to near 90 by next weekend.  So pretty quiet and dry week ahead after we kick the rain out of here.  Have a good one!