What a beautiful day yesterday! Plenty of sunshine after a gloomy week and to top it all off we got the moped group together again.  We ended up getting eleven people together for the picture for our website, DaytonAreaMopedRiders.com.  It was quite a story though to get to the eleven people.

Eight of us met up at my place around 6 PM and we started off by heading to Sonic down the street.  Sonic is great for groups because almost each person paid with a card once they ordered right at the kiosk.  Simple and fast. 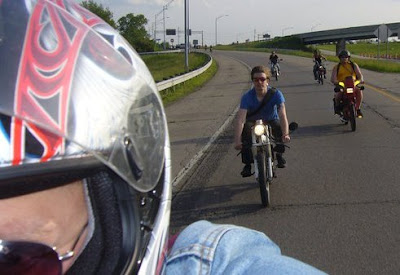 We took off from Sonic and the eight of us went to Oregon District Park.  Two guys found our website and emailed us about getting involved and ride their stock mopeds with us... So we rode down to the park to meet them and pick them up for the ride.  We rode around Fifth Third Field with the Dragons playing...lots of smiles and waves from the fans.

As we were going around the ballpark people were trying to flag us down at one party and then a block later some guy with a bicycle with a motor rolls up next to me.  He said that they wanted to start a moped gang and that his company was having a grill out and had free hot dogs... even though we just came from Sonic, we had to see what it was all about, so we followed him.

We rolled into the Real Art Design Group's parking lot and there were about four people with video cameras and others with still cameras capturing our pit stop... good times.  It turns out that none of them have mopeds yet, unless you count the motorized cruiser bike.  He did take an old Sachs moped, gut it, rebuilt the frame and put a Briggs and Straton motor on it... no pedals... and barely an improvement on performance...  heavy as a beast... but I admire the enthusiasm. We hung out with them for a little bit and gave them my contact information and told them as soon as they get mopeds, to hit us up. 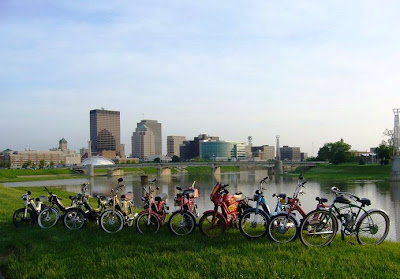 We did tell the guy with the bike to ride over with us to Deeds Park two blocks away, across the river.  We figured we would throw in his bike for the website pictures, just for the fun of it.  Wes's bike was not part of the picture because he tried pedaling his moped around to try to see if he could stir the pot with a park ranger... I think a few of the other guys did get a picture with all of the bikes when Wes finally came back.
We then slowly split up... a few guys hung out downtown and the rest of us all went through University of Dayton and then rolled around Carillon Park where the Blues and Brews Festival was being held.  I had to stop and throw off my helmet because a bee flew in my helmet and stung me in the ear... luckily no swelling, which never happens.

The remaining seven got less than a mile from my place before two people busted their throttle cables... I guess they weren't ready to mash the throttle yet.  After trying to get the bikes running with no decent results, I ran home to get my truck and picked the two of them up.

It was a complete blast to get together and ride with everyone...and the weather could not have been better!  I can't wait to do it again.

Today's weather looks to be great again, a little warm, but I will take it!  A chance for pop-up showers and storms starting tomorrow and lasting well into the workweek ahead... and highs will be in the low 80's most of the week.  Enjoy and have a good one!