Finally some rain for my garden... more coming??? 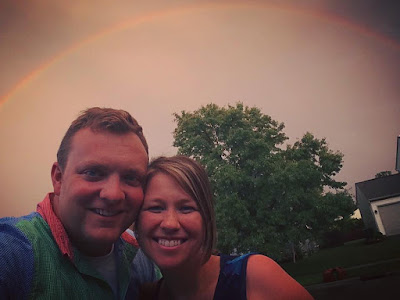 Dawn and I were coming back from a wedding rehearsal dinner with some heavy rain then started to hit sun.  I mentioned that there should be a good rainbow shortly and as soon as we got closer to home it started to pop out.  So we snapped a photo together. 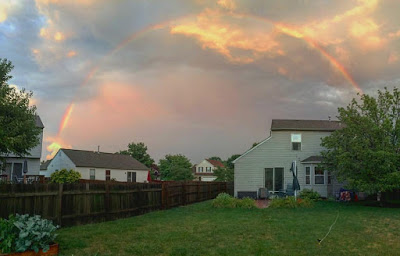 I went to the backyard to check the rain gauge as the storm was leaving and we got a LOT of rain! With the morning steady rain we picked up 0.77" of rain then the afternoon storm brought 1.85", so daily total at Michael House: 2.62"!  And I watered the garden the evening before... So hopefully my brief watering helped to let the rest of the rain soak deeper into the soil.  I can at least put the garden hose up for a few days! 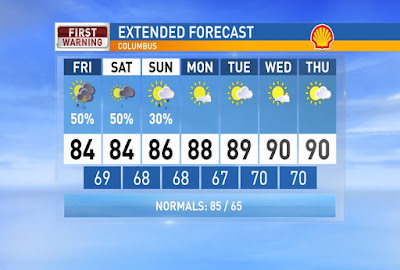 More scattered showers & storms possible later today, but fog will be the bigger issue for the morning. Rain on Thursday has left plenty of moisture for pockets of dense fog for Friday morning. Fog will clear out by mid morning then partly to mostly cloudy with more scattered showers and storms for the afternoon and evening with highs in the mid 80s. Saturday will be similar with pockets of fog that pick up rain today followed by some isolated PM showers and storms with mid 80s for highs. Another repeat on Sunday, but a lower chance of rain as high pressure starts building for early next week. We dry out next week and heat up with highs near 90 all week. Have a good one!

Posted by Andrew Buck Michael at 5:13 AM