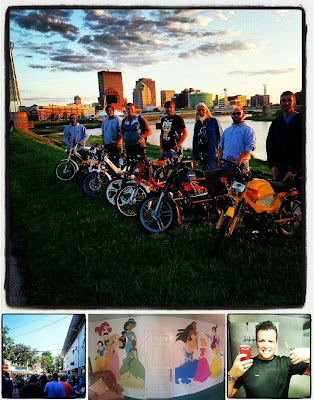 I couldn't think of a better way to really soak in the weekend... as if they will be going away forever. Friday I took a fantastic five hour nap after the morning show. I then had my final downtown Dayton moped ride. The group that turned out was some of the closest Dayton friends that I made. One of the guys blew out a tire on the way, but I want to meet up with him before I leave for a little ride. We rode around Dayton and had a great night. Saturday Dawn and I went up to the Great Darke County Fair with my sister and saw some of her blue ribbons. We had some fair food, but I had to resist from eating it all. When we ran my sister home I got to see her princess wall she has been painting in the spare bedroom and she is nearly finished. There are a couple of faces left to paint, but her talent level is amazing. She wants to get a job with Disney after college and it is quite clear she has the drive to do it. We hung out with friends Saturday night and then Sunday we hit the driving range, saw The Campaign, and then I tried to trim my hair. I got my haircut and the bangs were a little longer than the rest of it and my barber has been on a mini vacation to Green Bay for the Browns preseason game last week. I did a decent job, but cutting your hair in the mirror is hard... left is right, up is down, front is back... Frustrating to say the least. Sporadically, during the weekend, Dawn and I watched the sixth season of Dexter. Two episodes left. So yea, a pretty jam packed weekend trying to enjoy every minute of it.

The weather for the week ahead is pretty quiet. Today and tomorrow we could have an isolated shower or storm with a weak disturbance and highs in the upper 70's. Heading through the rest of the seven day forecast we tack on a couple degrees each day with a mix of sun and clouds and we top out in the upper 80's by next weekend. The next decent chance for rain looks to hold off until early next week so if you don't get the isolated rain today or tomorrow then get ready to water the garden. Enjoy the warm temps this week before it is time to close up the pool for the year. Have a good one!

Posted by Andrew Buck Michael at 4:37 AM