Here is a weird one... cataracts reversed?! 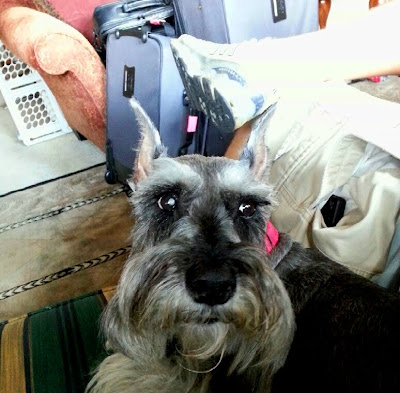 I have tried doing Google searches and doing some internet researching, but no results. So here is the deal... Buckeye has had cataracts since near birth. It is likely due to being raised in a puppy mill and the breeding that comes along with that. He has never really had very good sight because of this and would bump into things and then occasionally catch something out of the very corner of his eye and jump back. Essentially he is nearly blind. Both of his eyes used to have the white cloud over the iris, but recently one of the cloudy parts turned black. You can see it in the picture. I snapped this photo before leaving for vacation. Even though he is nearly blind, he could tell that we were getting ready to leave and would not leave my side. Anyway you can see that the left eye has the white cloud and the right eye looks fine, or at least no longer cloudy. (He is looking off to the right of the image so look at the right side of the eye for the iris) The weirdest thing is that he is bumping into far less objects. I am not sure what happened exactly but it doesn't seem to be bothering him. He is as happy as ever and doing better than ever. Anyway... I thought I would throw this out there and see if anyone has heard of anything like this... comment away...

Yesterday was fantastic. Today will be much of the same with temps just slightly warmer. Mostly sunny and a high in the mid 80's today then upper 80's tomorrow as rain arrives. Scattered showers and a few rumbles of thunder for late Wednesday through Friday. This will cool us off into the mid-low 80's Thursday and then upper 70's for Friday and the weekend. The weather for the weekend looks fantastic. Upper 70's and a mix of sun and clouds. We start to warm up for early next week with a few more clouds. Enjoy today and have a good one!