Good Friday morning everyone!  I am NOT enjoying this cold snap.  I did, though, mow on Tuesday before the cooler air kicked back in.  No running this week, but I considered the mow a good way to loosen up a little bit and I feel like I am 95% recovered, but man, that 5% is painful... (toe blisters)

In my last blog, I talked about my recent run: Vernal Equinox 24 Hour Trail Race. I realized there were a couple things I didn't touch on in that blog, so I wanted to include those. Most of it is nitty-gritty stuff and logistics, but important things I left out. For anyone who didn't read that blog, I ran a 24 hour race near Batavia at a horse farm.  The event also had a 12 and 8 hour option. 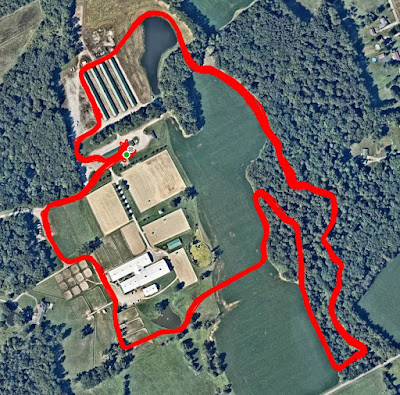 This is a map of the route I ran(clockwise). The dots in the middle are the start/finish. It was measured to be exactly 2 miles. I opted to request a clean horse stall to put my gear/food/etc. My stall was right next to the start/finish and only had to walk an extra 15 feet to get to it. So that is why that area looks a little "busy" from the 50 loops I ran, for the 100 miles. We left the start and turned north and went pass the 4 barns to the north. and it was all on gravel then around the pond it was a short area through some taller grass. Then the field was packed (a little squishy) and then we entered the woods. The woods was wide enough for a tractor to drive back there. There were three hills and the first two were only about 10-15 feet and the final one was about 20-30 feet. So all things considered, this was a very flat course. Once we came out of the woods on the far south section then we ran along the edge of the field shortly then one more short section in the woods. Then we turned back south and shot across the field. We then went into another section of grass near another pond and turned north for more gravel before reaching the finish of that loop.  I tried mixing up music and podcasts for distraction, but I also tried to stay alert to memorize hazards like roots so once it got dark for the night loops I would know where to be cautious.

I was asked a question about what I ate during the event. Most of the day I was running with a running vest and my bladder on my back was Tailwind and in my front smaller flask I had water because sometimes just water tastes so good. For anyone unfamiliar with Tailwind, it is a powder that you mix with water that uses starches for energy. So kinda like Gatorade, but not all the sugar. For eating while I was running I packed a ziplock bag with Swedish fish for trail snacking. Then back at the stall I had a third of a PB&J during the breaks I planned every 10 miles. I eventually couldn't stomach those and gave up on the final one. I occasionally would snag oatmeal cream pies, Pringles, Oreos, which I also brought. At the aid station I had quesadilla, popsicles, and potato soup. I also drank almost a full 2 liter of Dr Pepper. A well balanced diet. Oh and a few energy drinks for the night. I also brought toothbrush and toothpaste. So nice brushing my teeth late in the race. Basically I just kept fueling with sugar so I never hit a low point or bonked. I think I did a pretty good job and if I did start feeling "down" then some sugar seemed to help bounce back. I did grab some fruit from the aid station as well. I think I had 2 bananas, grapes, and some orange slices. If my stomach didn't agree with something then I popped a ginger candy and it settled my stomach to keep going.

I tried approaching the day very strategically. Run 5 loops and get to 10 miles. Take a break. Reset. Then go back out and do another 5 loops. It helped break up the event into manageable segments.

I was also asked what I would change and what did I learn. This one is a little easier now that I am a few more days recovered and had more time to reflect. I don't have a whole lot that I would change, but a few things probably would have helped me log a few more loops in the time given. First off... I would have had some crew there to help. I had a couple good running friends who expressed interest, but scheduling didn't work out. I had pretty much everything at the ready, but having someone to help with something would have been nice. I just would have felt guilty for them to be "waiting around" most of the day. That person could also have been a pacer on and off at night, once they were allowed, after 8PM. Having someone else to run with each loop and convince me to run instead of power walk would have kept my splits a little lower for the end. I just feel guilty asking someone to give up their day and night for that. Now, on the inverse, I would love to help some of my friends with something like this and I am excited for the opportunity to pace them.

As far as food goes. The fruit was great. I wish I would have brought some of my own. Especially some watermelon. Lots of water with it and very refreshing. Perhaps some instant mashed potatoes as well. The potato soup was really good. Something "wet" because the PB&J dried out my mouth and I would start drinking a lot of extra water or Tailwind.

As far as "down time" at the stall. I tried keeping the FaceTiming brief so I could reset my gear and keep going with a small break. I didn't want to get too comfortable and start getting stiff. I also know I played it more cautious than others by waiting out the lightning. In a race against the clock that meant that others got in a couple more loops while I was playing it safe.

I do think I need to figure out what is going on with my toe blisters. This is the only residual issue I have. My muscles soreness was gone after a couple days, but the toe issues linger... I have the blisters under my toenails on my outside pinkie toes and also my two pointer toes (the one next to the big toe). They are all under the toenail. I have lanced them all and drained most of the fluid, but man they are painful. It is getting better, but any rubbing right now aggravates it. I did a lot of reading this week on what causes it. Your foot is moving forward and if your toenail comes in contact with the shoe then it is pushing back on the toenail and the nail bed is between the bone and the top layer of skin. So that nailbed is being sheared and forced in an opposite direction of the foot moving forward so the blister forms for more cushion to "help". The problem is that the pressure under the toenail is painful. My pointer toes often blister on long races because the are the longest toe for me and they take the majority of the force of each toe-off or landing. Plus they sometimes rub on the upper mesh of the toebox. And with 100 miles adding up to about 170,000 steps, there is a lot of potential rubbing. I also have some thick nails so I think I need to file those down. They are already trimmed as much as possible. Possibly TMI, but for anyone wanting to do something similar this is good information to file away. I think my feet were good most of the day and 80 miles before the rain moved in, but then I felt the blisters more for the last 20 miles in all the mud and water. I also used Trail Toes on my feet before I started running, in the morning, and did not change socks all 100 miles. I did switch from my Altra Lone Peak to Altra Olympus shoes around mile 55 and the extra cushion was super nice. Perhaps I may need to lockdown my foot tighter to prevent any heel slipping, but I felt like my foot was locked down pretty good on the top of the foot and around the ankle. If anyone has any thoughts, I am all ears.

So overall, a few small adjustments if I had to do it again, but nothing major. I guess the biggest change is that I would have someone there to drive me home. Driving home with no sleep was potentially the biggest issue. I napped and drove home as safe as possible, but drowsy sleeping is dangerous. So yea. A few people asked some additional questions, so I figured I would get them all down in writing because I know, for me, I will probably come back and look at this again if I try to do another big adventure like this again. 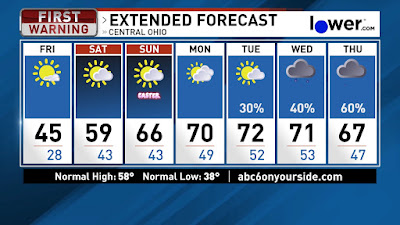 Our record low today is 20, set in 1907, and our current temp, at 7AM, is 21. So a cold morning, but lots of sun today and that will warm us up into the mid 40s for the afternoon with a light breeze out of the northwest. The winds calm down tonight and switch to the south with mostly clear skies. Morning temps for Saturday in the upper 20s, so another cold, frosty morning. A mix of sun & clouds for Saturday and we warm to the upper 50s. Sunday will be similar with warmer temps and we start in the lower 40s and warm to the mid 60s. More clouds Monday and we warm to around 70 for the high. Slight chance for rain sneaking into the region later on Tuesday then more scattered rain Wednesday and Thursday with highs around 70. So warmer and wetter by the middle of next week, but for now it will be chilly, bright, and dry. Have a good one!