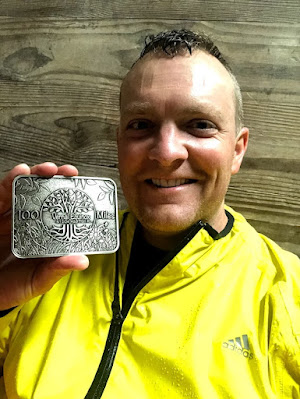 Good morning!  I am back to work today and still recovering, but I had a few people ask for a race report, so I am going to do my best to do that and thank the numerous people who helped me reach my A++ goal of 100 miles in less than 24 hours. 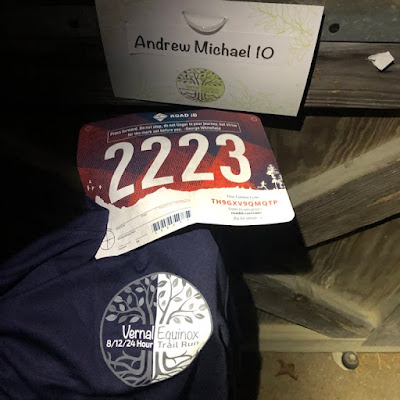 The course was a 2 mile loop at a horse farm in Batavia, just east of Cincinnati. The race was put on by Empower Ultras at Majestic Farms. I wanted to break the race up into smaller segments and decided to run 5 loops, 10 miles, then take a break to get some food, assess my gear, and FaceTime with my wife and kids when they were available.  I also owe a lot of credit to my buddy Mike Gampp.  He has bestowed a lot of knowledge to me and we recently ran 31 miles at Tar Hollow and each loop is about 9 miles.  Breaking up long runs into smaller segments makes it seem more manageable and you can stay on top of nutrition and self-care. We each got a clean horse stall, if we requested one, to put our food, extra clothes, shoes, etc.  There was one other Columbus runner doing the 24 hour event, Zach Franklin.  I reached out to him and we decided to share a stall. 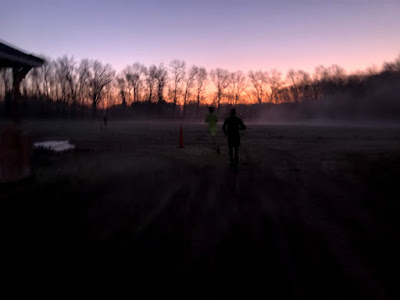 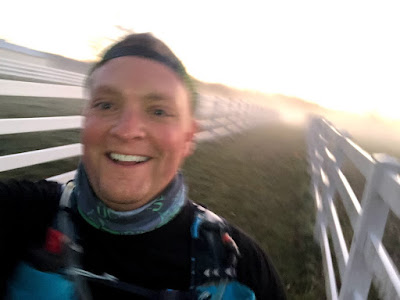 There was a 12 hour and 8 hour event that started out at 8AM, so I wanted to log 3 loops before they started so I was ahead of the pack.  And the pack was never really an issue because everyone spread out so much on the 2 miles of trail.  It was part gravel, grass, farm field, and trail with some roots to jump over. 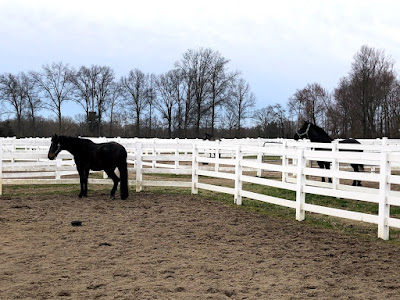 It was pretty cool to see the horses being taken in and out of the barns throughout the day.  I promised to snap some photos for my daughter. 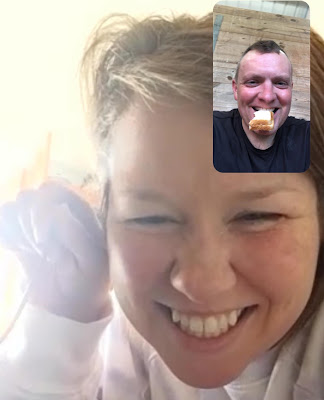 Since I did not have any crew there, I tried FaceTiming with my wife and kids during the breaks.  I was able to check in and she was able to make sure I wasn't pushing myself too hard.  It was also great motivation to see them.  I would crank out 5 loops then check in. I talked a little about that, this morning on Good Day Columbus.  I wasn't really planning on talking much about the race on-air, but my co-workers were not about to let me skip through today like nothing happened.
So checking in with them was a huge boost.  Especially when I knew nap time was coming up then I would push hard to crank out the next few miles go get back to the horse stall for a PB&J and FaceTime.  I didn't want to keep the kids up any later than they needed to be, before their naps. 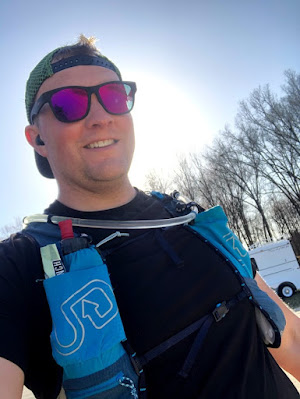 It did end up getting a little hot in the afternoon, but I tried to stay up on hydrating and I did some running and speed walking on and off.  If you can keep the walking to about 15 minute pace then you are still moving forward at a quick pace and using different muscles. 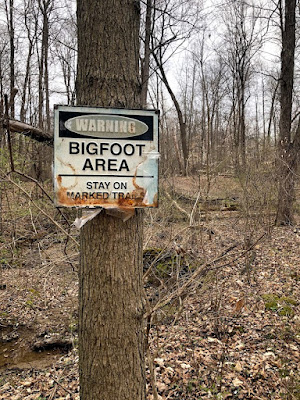 I spent the afternoon trying to memorize each root in the woods that could trip me at night.  I wore a headlamp at night, but if I knew a root was coming up then I would slow down to make sure I didn't trip. 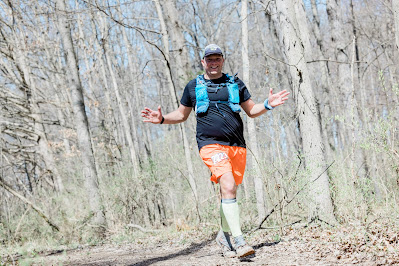 This photo was taken by Patience and Thyme Photography. 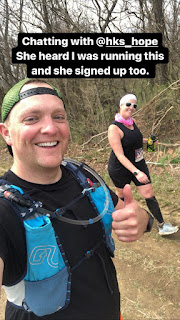 A viewer reached out about a month ago asking what I was training for and I told her.  She then signed up for the 12 hour event to use as a training run to go for her first 100k (62 miles).  So I joined her for a few miles to chat and keep pushing each-other on the trail.

One other person I need to give a shout-out is to a good buddy, Tony Huffman.  He is a paramedic and I was having some pain in my hip down to my knee and it made climbing the hills a challenge.  I asked him to call me and we talked through the pain and we both agreed it was an IT band issue.  He gave me a stretch to loosen up that area and that would keep me fresh for a few miles then I would stretch again. 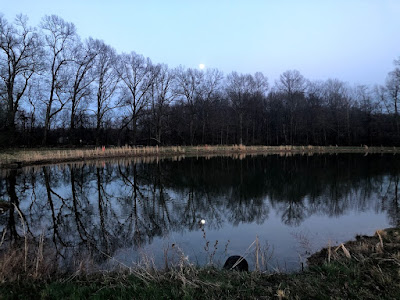 Once the sun set and it cooled off I took off and was running stronger than ever between miles 60 and 80. I really think the midday power walking helped stay fresh. The full moon was an added bonus! 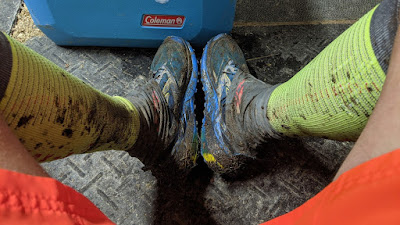 Then the rain hit. 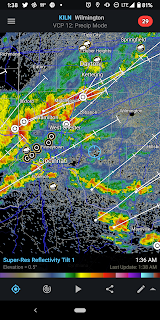 The trails turned into several inches of water and mud for my final 20 miles.  It took the remaining 5 hours to crank out those 20 miles.
Honestly, the mental hurdle for the last 10 miles was rough.  80 to 90 miles was starting to get muddy then more rain hit. I was playing it safe with the lightning and waiting out the heavier cells of rain. I was worn out and my stall-mate, Zach Franklin, was about to log his 100th mile.  So he encouraged me join him for one more loop to get me to 92.  After that loop we got separated and I thought he started the next loop so I went back out.  So a huge thanks to him for getting me to keep going while there was still time on the clock. He ended up going for 110 miles! 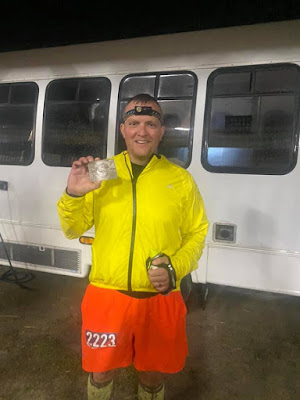 So yea... I finished my 100th mile at 23 hours and 22 minutes and my bib was 2223.  Kinda cool play on numbers.  I also had a little time to read through some of the inspiring comments on social media as well, so thanks to everyone who sent those.  I could have tried for one more loop to get to 102 miles, but I don't think I would have had enough time to get back before the 24 hours were up.

The aid station and volunteers were amazing.  They did some trail work during the day to add some sawdust to the muddy sections to make it a little drier for running.  With 119 runners doing loop after loop there was about 4000 passes on each section of trail. The aid station made some amazing quesadillas and potato soup.  Plus the popsicles in the afternoon were amazing!

So why did I do it?   I wanted to learn more about running longer distances and I did learn a lot.  I listen to a lot of running podcasts and try soaking in information.  Like using ginger hard candies to settle a stomach.  Worked great after my stomach said no more PB&J sandwiches.  I also detoxed from coffee and caffeine the weeks leading up to this.  So the caffeine helped me stay somewhat alert at night.  I also ran with my running vest for the first 50 miles and Lone Peak running shoes.  Then I swapped into Olympus with more cushion and a handheld bottle so it was lighter.  The swap-out helped so much to stay fresh. Also I finished off my night running with the headlamp and handheld flashlight.  It started to get foggy in the woods so a light shining under the fog was super helpful. I was lucky to have the opportunity to do this and able to adjust every 2 miles if I needed to do so. I learned a lot.  The only chafing or blistering issues were when the rain hit and a few of my toes have blisters because they were sloshing around in the shoes. But some of you know I make the balm and I use that to style my hair each morning, but it also worked GREAT as a lube for areas that rubbed or would chafe.  I applied it liberally and had zero chafing issues for the 100 miles.  Just wet soggy feet issues once the rain hit.

I am still sore, but less sore than when I finished running my first road marathon.  Roads beat you up and trails are softer and more scenic anyway.  What's next?  Rest and not sure.  I love races and having the support of the volunteers because they are safety nets.  But I also love being in the woods on adventures.  Time will tell.  Now... off to play outside in the warm temps and sunshine with the kids.  As always, I leave you with my forecast write-up, which can always be found on abc6onyourside.com/weather each morning. 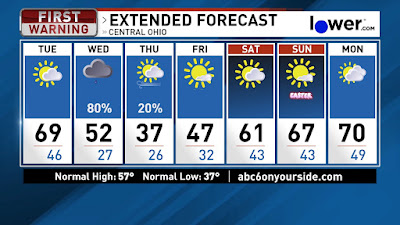 Good Tuesday morning! Today we will start out with cool temps and sunshine then we warm up to around 70 thanks to a brisk southwest wind as more clouds move into Central Ohio. Tonight we will see scattered showers and rain with low temps in the mid 40s. The rain will last until early tomorrow then slowly moving east and the second half of the day has a lower chance of rain and cool with the brisk winds switching to the northwest and highs in the lower 50s. A few spotty showers are possible later in the day, but the bulk of the rain will be tonight into early Wednesday. Winds over the next few days will be 15-25 mph with some gusts around 30-35 mph possible. Colder air continues to move in Wednesday night as our overnight low temps dip into the 20s. With the northwest winds we could see some flurries from the Great Lakes. So for Ohio the best chance of some lake effect flurries, on the tail end of this system, would mainly be North/East Ohio for Lake Erie, but even some moisture from Lake Michigan could sneak down for a few flurries late Wednesday into early Thursday to the north & west. Mix of sun & clouds Thursday with high of 37 and a brisk breeze. Friday we start out in the mid 20s again, so tend to sensitive plants, and with mostly sunny skies we warm into the mid 40s. Highs in the 60s this weekend with a mix of sun & clouds. More clouds Monday and a high of 70 then some rain returning for the middle of next week. Have a good one!