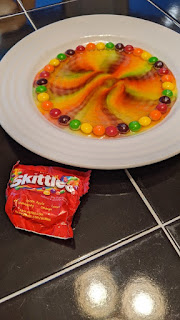 It has been so nice to get outside with the kids recently.  The snow is finally melting, but we have been trying to keep the kids entertained.  The Skittles experiment was a fun one.  You put Skittles on to a plate then pour warm water on the plate.  We arranged the Skittles in a couple different arrangements to make different designed.  Great way to use Halloween candy that we still have around. 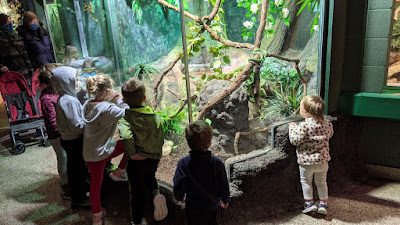 We also went to the zoo with the milder temps.  Lots of sun and lots of other parents there.  I am sure everyone has had cabin fever and excited to get back outside. 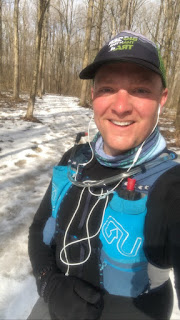 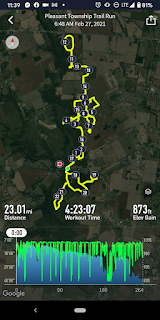 My weekend run was solo and I ran 23 miles at Battelle Darby Creek Metro Park.  And boy was it an interesting run. 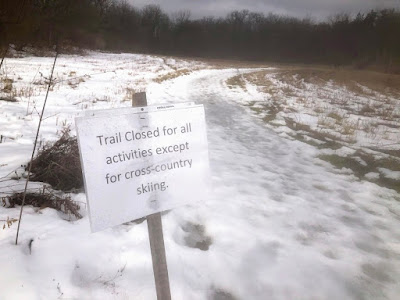 My goal was to run every single trail at the park, but one of the final trails was closed for cross-country skiing.  I was a little bummed to have to cut the run shorter than planned. Honestly, the snow was melting and I highly doubt anyone was going to try skiing on the slush, but knew better than to go against the posted signs and didn't want any issued with the rangers.  I have a big race coming up at the end of March and was happy to log the 23 miles that I did. 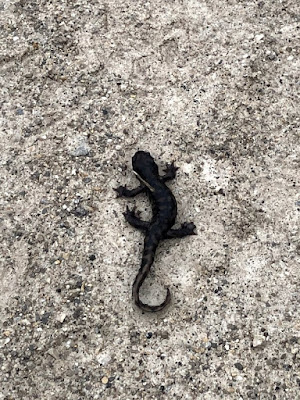 Check out this little guy I found on the trails!  I actually spotted another one as well and the Metro Parks commented back to a post thanking me for documenting it because they are monitoring the salamanders for their spring migration. 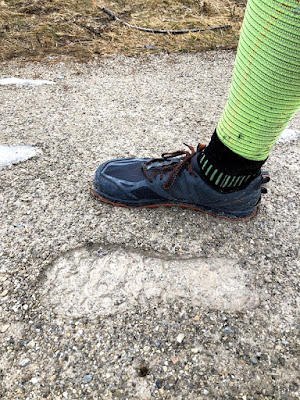 The gravel was super soft and was almost like sand because it was so set from the overnight rain. Which made for a nice and soft surface to run on.  I was very happy to have the soft surface because I had run 60 miles last week and a lot of that on the pavement.  I specifically wanted to run at this park because about 10 miles of the run would be on the gravel... As for the other parts of the trail: 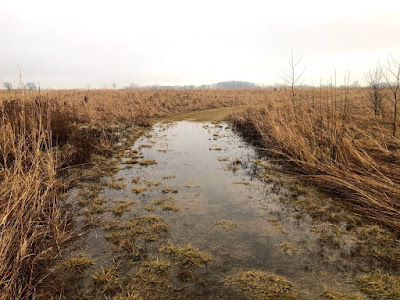 The wetlands were indeed wet. 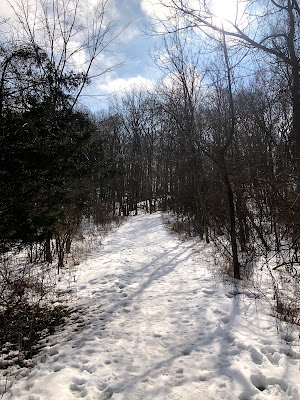 And the wooded trails still had several inches of snow on the ground. So quiet a variety of conditions.  Just what I wanted. 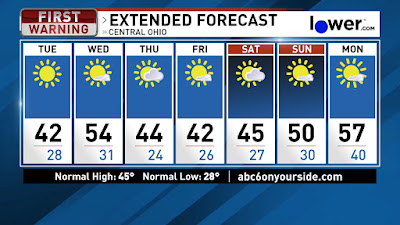 And how about this forecast!!! Are you kidding me?! We will continue our sunny streak today and looking at a completely dry 7-day forecast with no accumulating snow or rain on the way! Quite a change compared to February. Today will be sunny with morning temps in the lower 20s and highs in the lower 40s. So frost likely this morning and also for the coming mornings as we dip below freezing. Tomorrow we start with sun and more clouds later in the day with highs in the mid 50s. It will be our warmest day for the workweek with a light breeze out of the west tomorrow as well. A few clouds early Thursday with a cold front moving through and more sun in the afternoon with highs back in the mid 40s. Mostly sunny Friday with highs in the lower 40s. Then we start warming more for the weekend with mid 40s on Saturday and then 50 on Sunday. Partly cloudy Saturday and then mostly sunny on Sunday. We warm more on Monday with highs in the upper 50s and mostly sunny skies. Our next decent chance of rain returns next Tuesday. So by the end of the week our grass will likely start greening up a little. 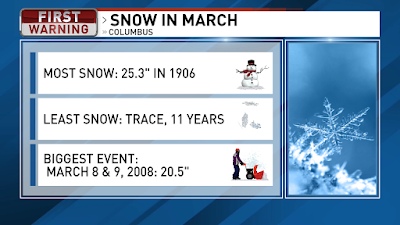 So there is no snow on the way in the near-term, but that may be changing by later this month. There are indications of colder air to move in later this month.  And statistically-speaking, we will see snow, based on our past winters.  We have never had a March with zero snow, since records were kept, going back to 1885.  The least snow was at least a trace of snow, which happened 11 different years.  The most snow for the month was 25.3" in 1906, but you very well may remember the biggest snow event we had in March of 2008.  We picked up 20.5" of snow over a 2 day period.  The rest of that month, March 2008, only brought 1.3" of snow for a total of 21.8".  That event was also the biggest snowfall event for any time period for Columbus.  So... no snow on the horizon for now, but it may be hiding just over the horizon. Have a good one!