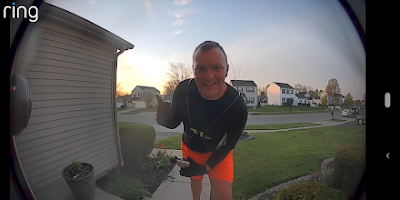 I ran 10 miles early last Saturday before the kids woke up... 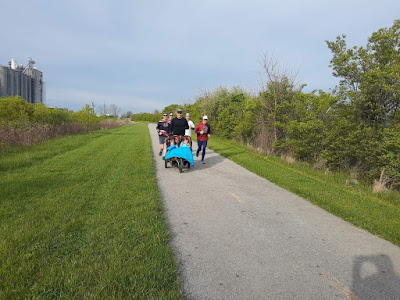 Then I took the kids for a 5 mile run with Columbus Westside Running Club to get some donuts... 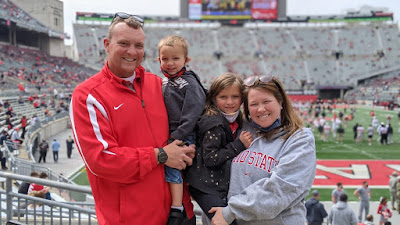 THEN we went to the Ohio State Spring game.  Busy Saturday followed by a nap for all of us. 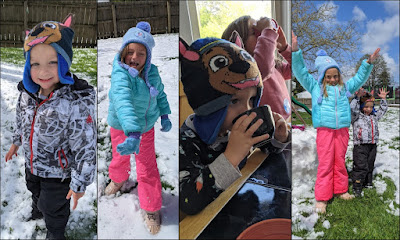 Then we got some midweek snow and I had a lot of fun playing in the snow with the kids.  We went outside as soon as Summer got home from preschool. 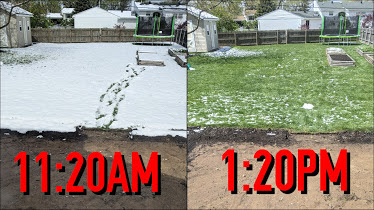 And it was good we played when we did because the April sun is much more powerful and we melted the snow very fast.

We actually got another round of wet snow yesterday that melted almost immediately as it fell. 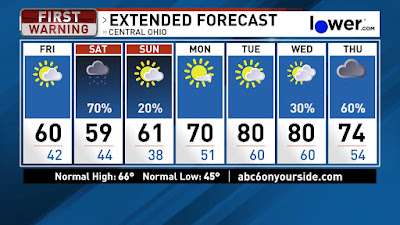 We have one more frosty morning then we will stay mild this weekend and a big warm-up next week. Temps this morning are in the mid-low 30s for Central Ohio and some upper 20s in Eastern Ohio. We have clear skies for now with an area of clouds to the west that will be moving in for the middle part of the day. We may squeeze out a sprinkle or two, but should be a dry day for most of us. Clouds break up some later this afternoon as highs climb to around 60. More clouds tonight and overnight lows in the mid 40s. Saturday will be a cloudy day with similar temps, warming to around 60. There is a low chance of rain before lunch, but the chance of rain goes up in the afternoon and evening. The steadiest rain looks to be the Southern half of Ohio for the second half of your Saturday with lighter rain for Central/Northern Ohio. The rain kicks out by daybreak on Sunday then clouds clearing through the day with highs around 60. We warm to 70 on Monday with mostly sunny skies. Then we bounce up to around 80 for Tuesday and Wednesday. Tuesday will be dry with partly cloudy skies then a slight chance for rain later Wednesday. More rain expected with a cold front on Thursday. Temps do fall a little big by the end of next week. Have a good one!

Posted by Andrew Buck Michael at 9:20 AM