So long old friend... I lucked out and find a gem of a bike a few years ago.  Minty 1981 Honda Hawk CB400T that was garage kept for 31 years because the original owner bought it and rode it for 600 miles then forgot about it in his hanger. 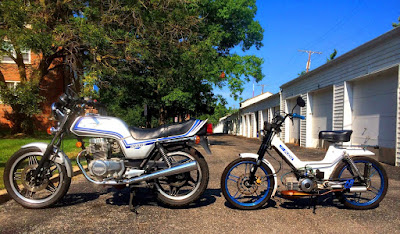 That bike and my Puch Maxi will be my favorite two bikes of all time.  Both were a blast to ride, but the timing felt right to sell the bike and focus on family.  Far too many drivers continue looking at their phone than the road so my safety and well-being is at an all-time high at home with a family that depends on me being there with them.  Life outweighs the risk, and if I want to go for a spin then I know where to find the bike and take it around a block or two.  Plus this allows for more room in our garage for bike trailers and other fun stuff for Summer. 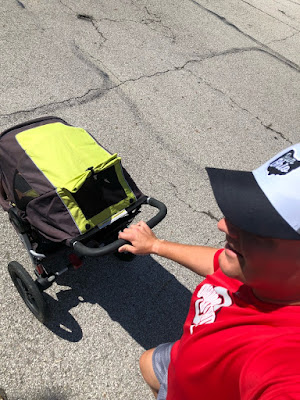 So from two wheels to two legs... I only did one 3 mile run last week during the week as I was still resting up from a few injuries. 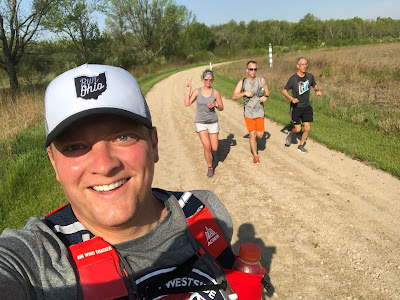 I did go out and do a 14 mile run with some friends on Saturday morning and I feel WAY better now, so back into the swing of things as I only have 4.5 more weeks until the Mohican Marathon! 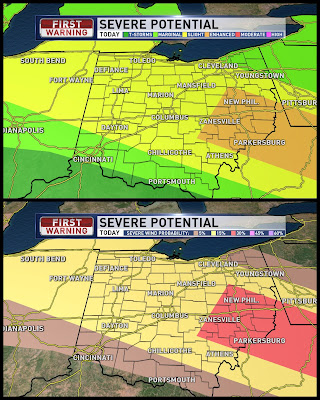 Storm Prediction Center has expanded the Slight Risk for most of Central Ohio now and Enhanced Risk for Eastern #OhioWX. Gusty winds are main threat.

The latest HRRR model bringing some storms into Columbus between Noon and 3PM today. Other models are having this fizzle out some and staying more north. Regardless... stay alert today!

So this stationary front is not going anywhere, but it is showing some patterns to help with the forecast. Based on the past few days, there have been nocturnal or early morning storms about 40-70 miles north of the front, then during the afternoons/evenings there are diurnal storms about 20-30 miles south of the front.... Leaving I-70 to US30 fairly dry over the past weekend. So today we will have a (weak) Low in Kansas ride along that front towards Ohio and lift the stationary front a little farther north today, allowing for temps to warm back into mid-upper 80s and a better chance for rain in Columbus. I am upping our PoPs to 60. Central, Northern, and Eastern Ohio is in the Slight Risk for severe storms with gusty winds as main threat for any severe storms. Marginal Risk for the rest of Ohio. 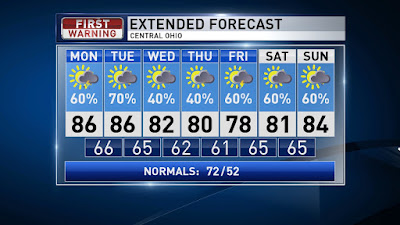 Then for the rest of the week... This could also lead to some nocturnal or early morning rain on Wednesday, so I am going to leave Wednesday at a 40 PoP and same for Thursday, but afternoon showers/storms will mainly stay farther south. If the front stays to the south then temps stay a little cooler, near 80, & the best chances of the rain will be mainly in the late night to morning, rather than the afternoons. The front then starts to lift back north on Friday and stays farther north on Saturday and Sunday allowing for warmer temps. With the front lifting north and allowing for more afternoon/evening storms, I am going to go with a 60 PoP for Friday and the weekend. Have a good one!