Breakdown of the coming snow 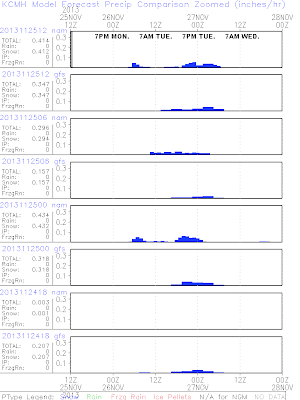 First, let's talk about timing.  Ohio will have some light snow showers for Monday night into early Tuesday, but that will not be the main event.  By Tuesday midday we will only have a dusting to light accumulations.  The ground is cold enough for the snow to stick so it will be enough to make it slick on the roads.  The majority of the snow will come later Tuesday into Tuesday overnight and be done by daybreak Wednesday, except for some light scattered snow... and the accumulating snow will mainly affect the Southeastern and Eastern Ohio.  So how much?

Above is the Canadian model.  Most of the snow for Ohio will ride right along the I-77 corridor. 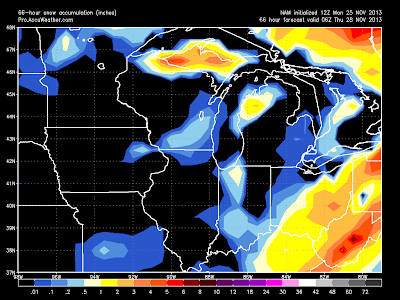 The next model above is the GFS, American, model.  It is bringing the snow a little further West and still giving Columbus and Southern Ohio a decent accumulation, but still keeping the majority of the accumulation along the I-77 corridor. 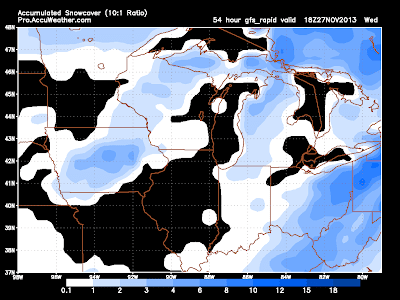 Lastly, the NAM.  This is the one that I agree with the most... as far as where the heaviest snow will be... but I do disagree with the amount of snow.  I think it is overdoing how much snow we will see.

The Euro is also agreeing with the NAM, but the output shows liquid equivalent, so I didn't include the image as to not confuse anyone.

So how much snow will we see? 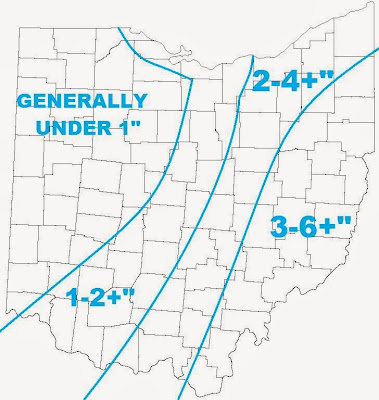 Pardon the crude map, but today is my day off (Since I am working Thanksgiving and Black Friday) so I baked this up with Mircosoft Paint.... The Easy Bake Oven of graphics programs.  I put the + sign because There will likely be pockets of higher snowfall totals, mainly in the eastern portions of each section.  Again, these are snowfall totals by Wednesday morning.  Most of the accumulation snow will not start until later Tuesday.  We then see high pressure build in for Thanksgiving so drier weather.  The roads will be in their worst condition early Wednesday.  It shouldn't be too big of an issue by later Wednesday as crews plow off any of the Eastern snow.

Well, I am off to the gym.  Bill Kelly will be in tonight with an updated look at snowfall totals on ABC6 & FOX28.  To check the radar and the latest Winter Weather Watches/Warnings check out the station's weather page, just click HERE.  Have a good one!