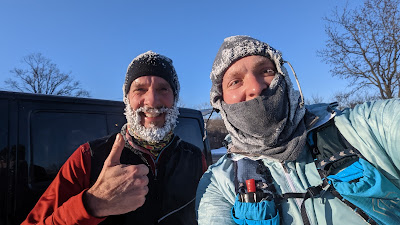 Had a great long run with my buddy Mike on Saturday. It was 4 degrees when we started with a light breeze. He had a beard that was covered in ice to keep his face warm. I had to resort to covering my face. Clear and cold morning... but that is NOT what is on the way for us later this week.

A developing winter storm will move in for the second half of the week. 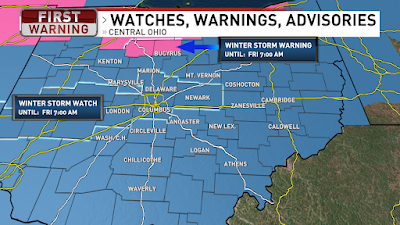 Winter Storm Watch for all of Ohio thru Friday morning. Some counties have started upgrading to the Winter Storm Warning. Rain Wednesday changing to ice and snow for Thursday into Friday. 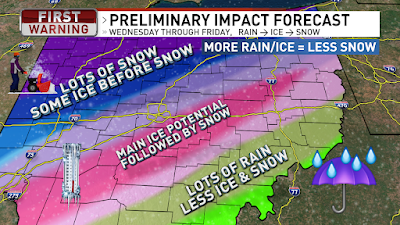 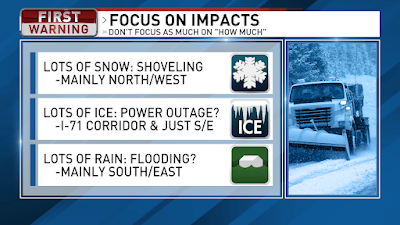 Thursday is the tricky situation. Cold air will funnel in near the ground while it will be warmer above us. 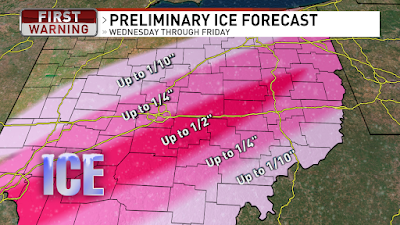 So the transition line will become wider for freezing rain and sleet (ice pellets) This icing area will generally go from Cincinnati to Columbus to Youngstown and some of the heaviest ice looks to be just a little south/east of that line. So during the day Thursday we will have ice along this line with rain in S/E Ohio and snow still falling in N/W Ohio. Accumulations of ice could be upwards of half an inch, which would coat powerlines and trees. Add in some breezy winds on Friday and there is potential for power outages by Friday. The icing line continues to drift very slowly towards S/E Ohio Thursday evening while Central Ohio goes from ice over to snow. By Friday morning the snow is wrapping up and moving off to the east. 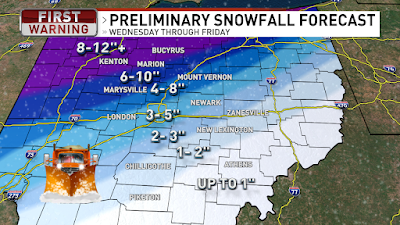 Northwest Ohio will see the heaviest snow with 8-12”+ likely. But areas that see prolonged icing will see significantly less snow. There will be pockets of warmer or cooler air, so take the forecast with a grain of salt because 1 extra hour of sleet will result in 1” less snow. Following the ice along the Cincinnati to Columbus to Youngstown there could be an additional 3-5” snow and S/E Ohio seeing even less snow because of the prolonged rain then ice and by the time the cold air arrives for snow then most of the system is moving off to the east and out of here, by midday Friday. 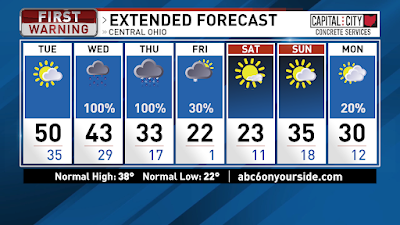 Friday and Saturday will be very cold with highs in the lower 20s and morning low temps around 0. Skies will become partly cloudy later Friday into Saturday. We will also have a brisk breeze out of the north to drive wind chills even colder plus give us the potential for power outages with the icing. Sunday we start warming back into the mid 30s and a slight chance for a few flurries Sunday night into Monday.

Stay tuned to the forecast adjustments because if the colder air arrives faster or slower then it will adjust where the heaviest icing will occur and impact the snowfall totals greatly. Have a good one!