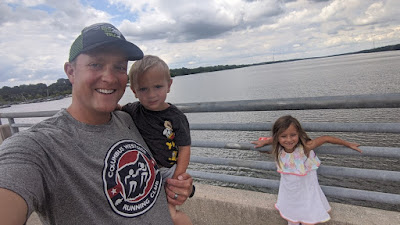 Hello! Hope you all are staying well and healthy. Been a busy week. I had to drop off a bulk order delivery of Balm By Buck last week so I took the kids to the Hoover Reservoir on the way home.  We ran across the dam.  I made some dam jokes, but they didn't get any of my dam jokes.  Lots of dam people out and some of the dam steps were even closed.  They thought it was cool to see all the dam water and even a couple dam fishermen. 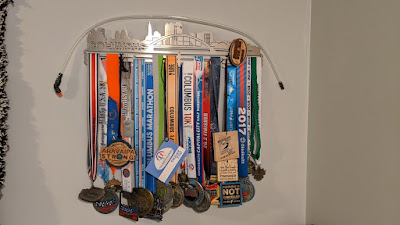 I did a post about the 63 mile day where I ran the Columbus Running Company's Find Your Limit Virtual Mile Challenge.  I had to run one mile every 15 minutes from 6AM until 9PM to see who could last the entire time.  6 of us made it to the end without dropping out and they sent a thank you card so I made that into a finishers award with my other race medals.  It is interesting that some of the most challenging races and events that I have done have the smallest awards. I wanted something to hang up for the memories of the event. 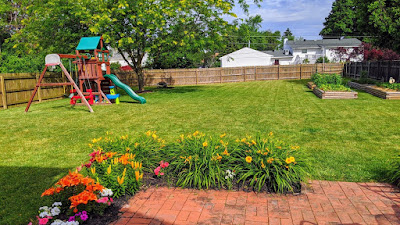 I am back to work now, but the backyard is looking 100% with the flowers coming into full bloom.   Kinda wish I was still doing augmented reality forecasts from the backyard. 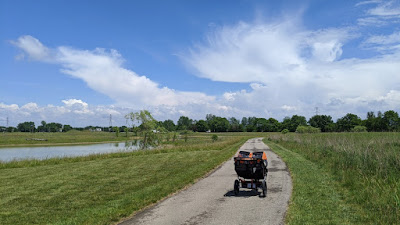 I took the kids running last week on Thursday and I had to stop to get a photo of the distance storms.  The tops of the storms were getting caught in strong winds in the upper part of the atmosphere and fanning out.  Really cool. 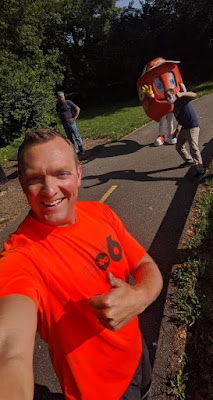 I also had a "run" Friday morning with Mugsy.  Our station is a sponsor for Lifeline of Ohio's Dash for Donation 5k virtual run. So I got together with Mugsy for a fun promo shoot. Then I went home and had lunch with the family before my wife and kids went up to Cleveland for the night because Dawn was getting together with one of her best friends.  I stayed home, packed up my running gear, and went to bed early for a big Saturday run. 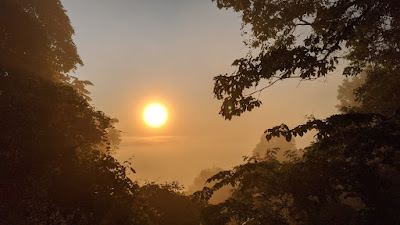 My friend, Mike, picked me up at 4:30AM and we went down to Shawnee State Forest.  Here is the sunrise from Picnic Point.  If you look carefully at the bottom, the valley was filled with fog and we were up above the clouds and fog to see the sun.  We stopped here then went to the trail head for the start of our run. 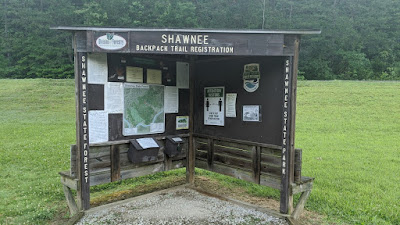 Here is the start of the backpack trail.  I heard good things about this park, but I REALLY fell in love with this state park and it is likely my new favorite.  It is one of the most remote parks in the state, but they offer some things that you can't find anywhere else. Time to hit the trails! We were tackling the south loop and wilderness trail. 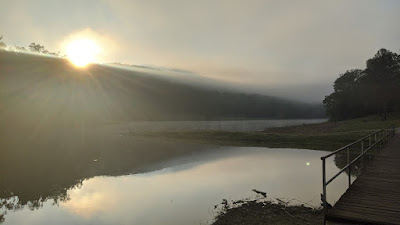 No fog over the lake.  One last stop at a "restroom" because we were not going to find any more while out in the woods. 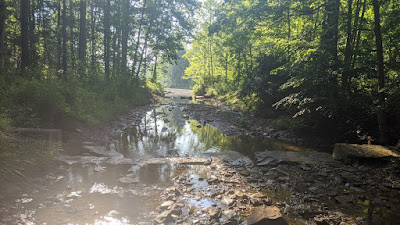 Lots of very scenic areas along the way.  This is one of the stream crossings.  The block stones at the bottom were blasted out of the hills decades ago and used as erosion mitigation now. Some of those stones were used to build skyscrapers in Cincinnati. Lots of hills were left though for some ups and downs on the trails.  Some of the climbs were very steep, more than a 20% grade. 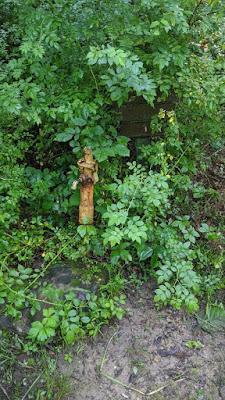 Alright, this is something that won me over with Shawnee.  Almost all of their campsites have cisterns.  So they truck in city water and fill up these reservoirs that are gravity fed to these spigots.  So you had a fresh supply of clean water for drinking. 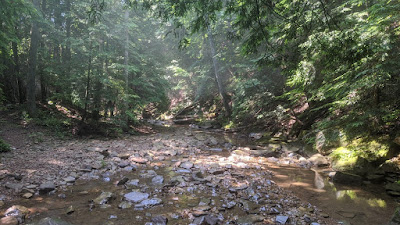 One spot that did not have a cistern was campsite 6.  It is one of the most remote campsites in the state.  No cistern water, just a beautiful hemlock grove next to a stream that flows nearly all year long.  We didn't stay here long, but had one more ridge to cross then down to the next stream. We cut off of the backpack trail and went out on the wilderness trail.  The new trail does not allow motorized vehicles or any mechanical devices to clear the trail.  So the woods, as nature intended, with only hand tools allowed to be used to clear any downed trees. 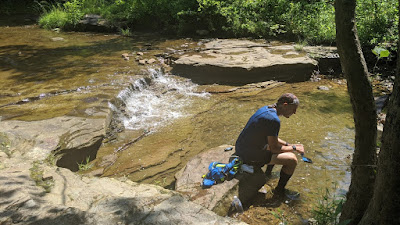 We stopped at the next stream to filter some of the stream water for our packs.  At this point we were running for about 4 hours.  It was nice to get a 10-15 minute break.  Then off into the wilderness with a fresh supply of clean water. 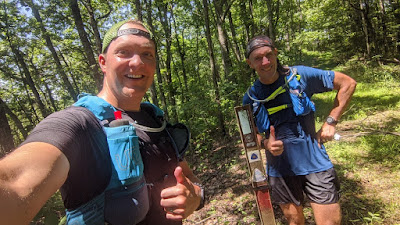 We stayed on the wilderness trail for about 5 miles before it connected with the Buckeye Trail and then the trails headed back to the main backpacking trail. 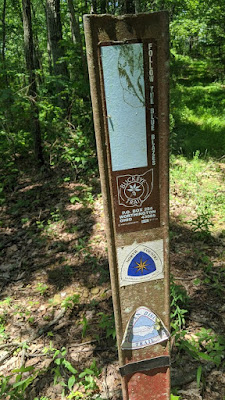 This spot is the most remote section of trail or wilderness you can find in Ohio.  Miles away from civilization.  And with it being a protected wilderness area there are no vehicles allowed in these locations.  It made us wonder how you would get rescued if there was an emergency.  Cell signal on the entire south route is basically nothing, so you couldn't necessarily call if you needed help anyway.  This is one reason why going as a team was smart on these remote trails. 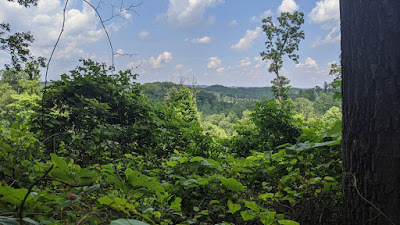 Most of the time we were running in a green tunnel, but we occasionally would come to a clearing on the ridges to get a view of the other ridges in the distance.  I did get a little dehydrated for 90 minutes on the run.  I was not taking in enough water or Tailwind during the later part of the wilderness trail.  So from the cistern on the wilderness trail until campsite 7 I had high heartrate and some discomfort.  The downside is that there are some big climbs from the valleys to the ridges and that would spike my heartrate.  I had to add some pauses and played catch-up with hydration. It didn't help that temps were approaching 90 and we were exposed to the sun part of the time. I eventually got more fluids in and back to normal.  Which was nice because, from campsite 7 to the end, the trail was a nice, generally downhill, rolling single track back to the finish.  We ended up with just over 32 miles and and 6,000+ feet of climbing in about 9 hours. Part of that was bushwhacking and going around/over/under downed trees. Fun day!  I got home about 30 minutes after my family returned too, so timing was perfect for a Saturday long run in the woods. I wore compression shorts to avoid chafing, but I do have a little on my thighs.  Run 30+ miles and that happens. Didn't notice it while I was running, otherwise I would have used some Balm By Buck during the run. 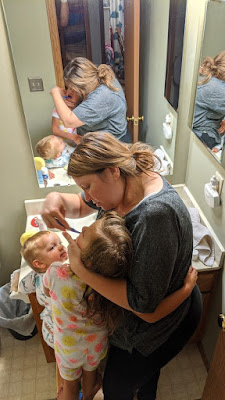 The kids had a blast hanging out with grammy and papa. I handled story-time Saturday night and mom handled brushing the teeth.  Love this photo with Dawn and the kids. She is such an amazing mom to the kids. 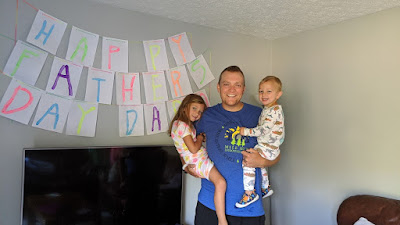 Yesterday was Father's Day and we had a great day hanging around the house. Summer painted the banner for me. I got some new running shoes, an awesome coffee mug, and a watering can for the garden because my old one dried out and cracked. 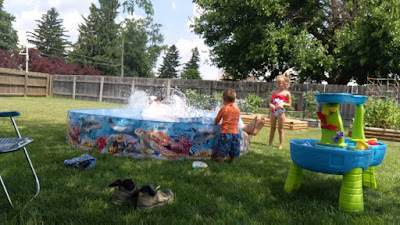 We spent the day in the backyard.  We filled up the kid's pool and I ran 1.5 miles of loops in the backyard to try and loosen up a little then jumped into the pool.  Lots of splashing and fun before family nap time.  Then back outside to grill out some burgers. Then we took buckets and used the pool water on the garden and flowers.  The ground has some pretty large cracks from the lack of recent rain.  Fun day all around spending time with the family and staying cool since we hit 93°F yesterday. 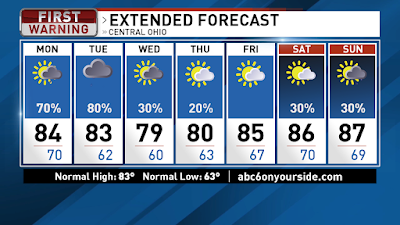 Grab that rain gear for this morning! We have some showers moving through and even a few rumbles of thunder with some pockets of downpours. So a wet start to the morning for most of Central Ohio then the rain breaks up later this morning. That will leave us with a partly cloudy, warm, and humid afternoon with just a slight chance for rain during the second half of the day with highs in the mid 80s. Tonight more rain is expected to move into the area and we will see a very similar day on Tuesday as Monday. Main chance for the scattered rain on Tuesday will be the morning then a lower chance for spotty rain later in the day. A cold front will kick through later Tuesday and drop our humidity and temps for the middle of the week. We could still see a couple spotty showers or storms on Wednesday and Thursday, but those will mainly be the afternoon isolated pop-up variety with highs around 80. Humidity starts climbing again on Friday with partly cloudy skies and highs in the mid 80s. Back to upper 80s, higher humidity, and scattered pop-up rain for the weekend. Have a good one!