Back from the Disney Marathon! 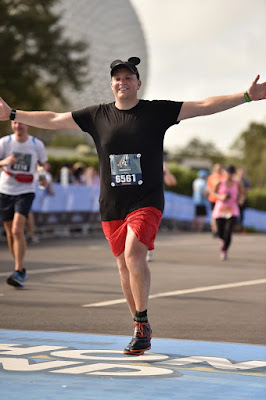 This was an interesting race and this finish was amazing!  It was a VERY hot and VERY humid race... even for Florida.  Some of the later runners had the course shortened or they were even pulled off the course for safety reasons.   For me... I took it in stride and had a lot of fun.  This is my first Run Disney race and I learned somethings for any future races... 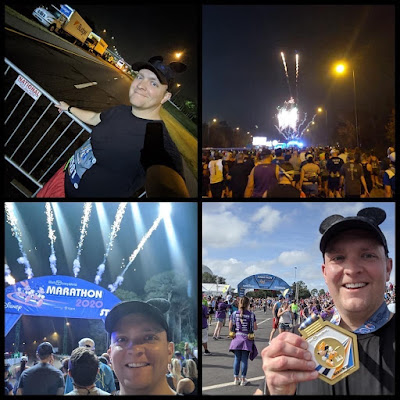 I didn’t realize I was in the last corral until the expo ended so I started out in the very back. Literally the back fence.  I sent in my qualifying time to put me in the proper coral for the proper runners, but apparently it didn't go through and there was no confirmation or rejection if it was acknowledged.  So I started from the very back and I was not going to let that get me down. I ended up passing more than 11,000 of the finishers, and there were a lot of people that didn’t finish. I made sure to pass respectfully on the edge, in the grass, and not cutting up through the middle. Made my move early while it was still cool, and cool being 70° at the start. It was very warm and very humid once the sun came up. 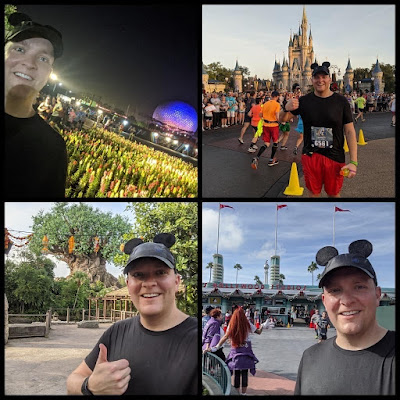 But I can say one thing I never could before:  I went to all of the Disney World parks in one day AND one of the water parks as well! 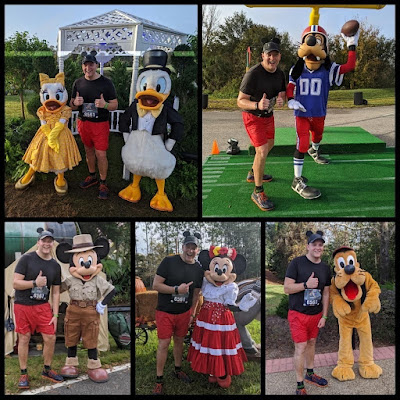 I soaked in the entire experience and stopped 29 times for photos with the characters. My finishing time wasn’t even a goal. Just enjoy the race. Once I was in people my pace I just settled in and trudged through humidity. My shoes were sloshing in sweat by mile 10. My wife had the kids at mile 23 and that was motivation to keep going. By not acclimating to the heat it really took a tole on my heart rate. When I stopped to see my family it was 202! I rarely ever get that high. I had been hydrating religiously through the race, but this one was a fun, brutal race. 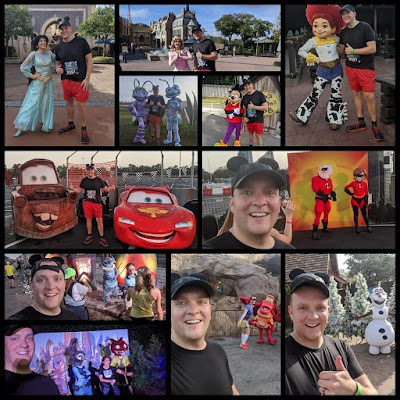 I highly recommend a Run Disney race if you are looking for a good time. It’s not where you go to try to PR. I may have bit the bug and be back in a couple years for the Dopey Challenge: 5k, 10k, Half Marathon, and Full Marathon. Run Disney knows how to put on a fun experience.
Up next: vertical mile race in a month. Time to work on some hills! 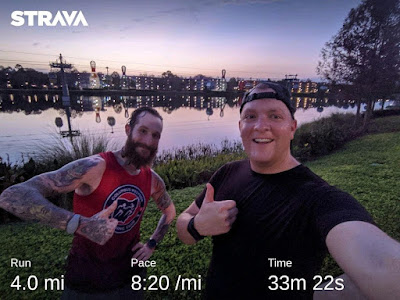 I was planning on zero running the rest of the trip, but a buddy happened to be staying at the exact same hotel.  So we did meet up for a morning run.  Great to catch up with Steve, plus he gave me some pointers on riding some of the Star Wars rides at Hollywood Studios. 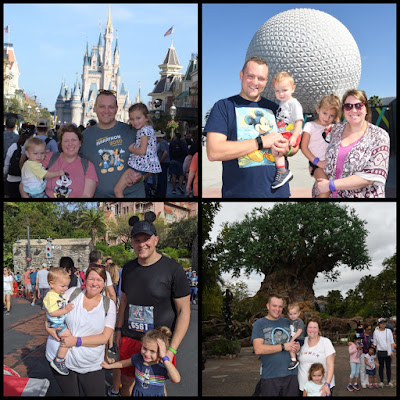 The family had a great time visiting Disney.  Disney is not a cheap vacation and we saved up last year for this trip.  We did do some tricks to save some time and money while there and really enjoyed our time. The kids stayed healthy and it was just a joy to see Summer really in that perfect age to enjoy the "magic" of Disney. 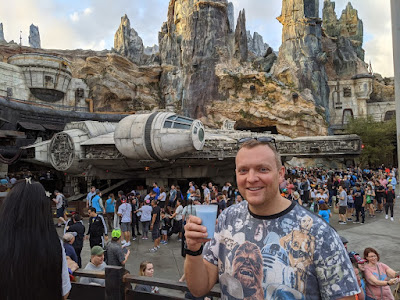 I particularly geeked out in the Star Wars land: Galaxy's Edge. 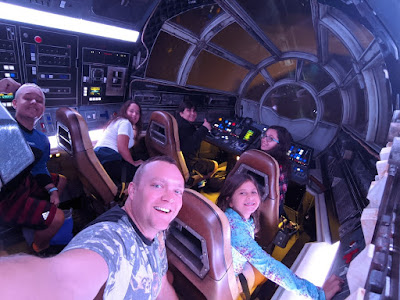 I rode Smuggler's Run, which is a motion simulator game/ride where you "ride" in the Millennium Falcon.  The first time I tried to ride it the ride broke down.  Our motion simulator stopped working and it had to be reset.  I was stuck in there with 5 kids from Brazil for about 15-20 minutes.  We had some laughs and Disney gave us Fastpasses to ride again. 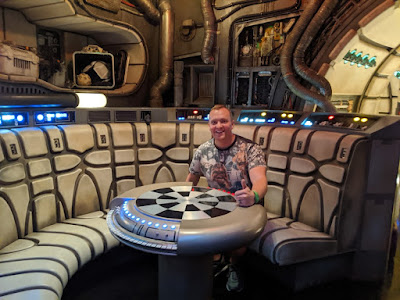 The second time I knew where to look or stop for photos. 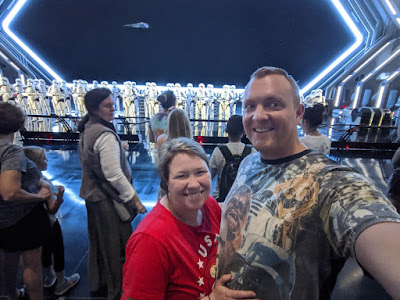 Dawn and I rode Rise of the Resistance.  My parents came down to stay at the resort, but not go into the parks.  So they met us to take the kids so we could go and ride this together.  It was more of an experience than a ride.  So cool.  So many visual and special effects to pull off the "magic" and I HIGHLY recommend getting to the park before it opens to try to ride it. 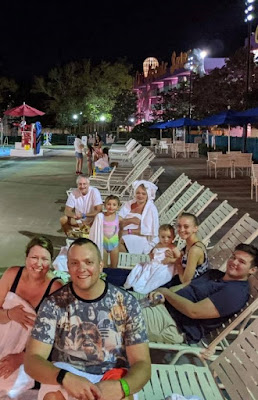 It was my mom's birthday while we were down there and she said it was going to be hard to top this birthday for her. 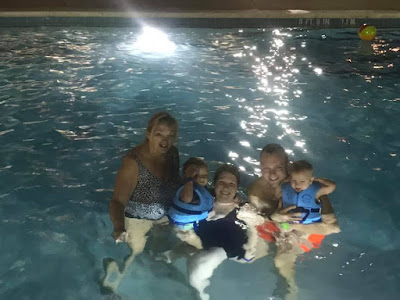 Spending time with her grandkids and enjoying the warmth of Florida is a GREAT way to spend a birthday, in my opinion. 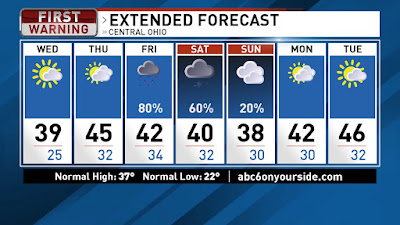 Good morning!  This morning is our coldest morning on the extended forecast.  We are starting out in the mid teens again, so bundle up.  We have clear skies to start the day then more clouds moving in throughout the day.  We will warm into the upper 30s.  Mostly cloudy and chilly tonight with low temps in the mid 20s.  Mostly cloudy again on Thursday with highs in the mid 40s.  Rain moves in Thursday night.  Our temps should be JUST warm enough that we stay mostly rain on Friday.  We will have to monitor the temps Friday morning because if we happen to dip a little cooler then some wintry mix is possible in the morning.  Something to keep a close eye on, for sure!  On and off rain on Friday, moderate to heavy at times, and highs in the lower 40s.  Cooler temps move in Saturday and we will see scattered lighter rain changing to a rain/snow mix.  We then have some light snow and flurries Saturday night and Sunday.  Right not it looks like no significant accumulation expected.  Our high temps will be around 40 on Saturday then upper 30s on Sunday.  High pressure builds Monday into Tuesday and we start warming back into the 40s with clouds slowly clearing out for more sunshine. Have a good one!


Posted by Andrew Buck Michael at 9:41 AM