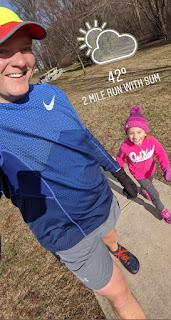 Started out 2020 with a 2 mile run with Summer.  We ran around the neighborhood and ran to the park.  I did laps while she played to get me up to the 2 miles. We also did a little on the trails too and had some fun in the woods. 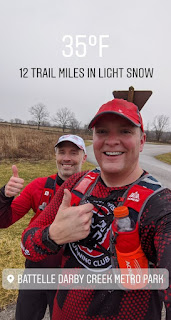 I had a 12 mile taper run on Saturday.  The kids were going to go to Cleveland to visit their grandparents, but Evan was sick.  He is better now, but he did not get very much sleep at night.  So I slept in Saturday and did not wake up in time for the big group run.  Luckily I knew my buddy Jason runs a little later so I joined him for some trail miles. 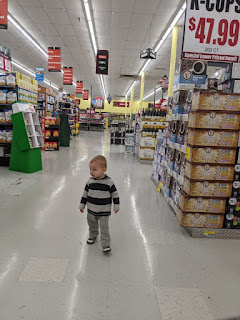 Evan snapped back quickly with some extra rest.  So thankful that he is back to his normal ornery self.  We have to lower his crib a little more because he is starting to try to climb out of the crib.  Summer never did that.  She stayed in the crib for almost 3 years old, until she got a big bed with Evan needing her bed. 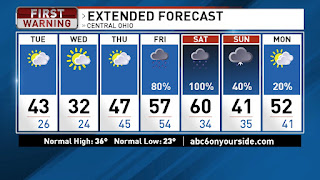 We have an area of low pressure passing by to our south, through Kentucky into West Virginia.  Southern/Southeastern Ohio will see some flurries and light snow showers near the Ohio River this morning.  By midday today we will see the clouds clearing some for partly cloudy to mostly sunny skies for the afternoon.  Highs in the lower 40s today.  Clouds move back in tonight with a weak cold front coming in from the northwest.  A few flurries possible late tonight and for the start of the day Wednesday.  Clouds clear out, again, for some afternoon sun on Wednesday, but colder with highs in the low-mid 30s.  Sunshine early Thursday then increasing clouds and highs back in the mid-upper 40s.  Rain moves in Thursday night and we are in for a wet stretch.  Rain showers on and off on Friday and heavy rain at times Friday into Saturday. 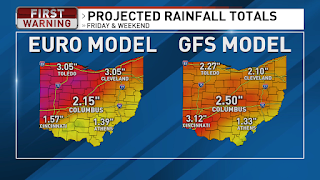 Forecast models are still showing 1"-3" of rain for Friday and the weekend.  Temps also climb into the upper 50s on Friday and around 60 on Saturday.  Temps fall Saturday PM into Sunday with highs in the lower 40s.  A light wintry mix is possible on Sunday on the tail end of the rain, as temps cool down.  Mostly cloudy and cool on Monday.  Have a good one!