It's what everyone is talking about... Will we have a White Christmas. Here is the latest info and my thoughts on our odds... 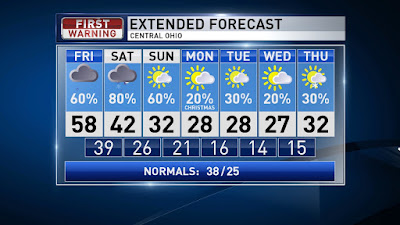 Have the rain gear handy for today. We will have on and off rain for today and warm temps. Steady rain moves in later tonight, especially for Southern and Eastern Ohio. Falling temps tomorrow with steady rain, especially for Southern and Eastern Ohio. As temps fall tomorrow the back edge of the rain will transition over to snow. They may be a narrow band of snow that could set up for a couple of hours in the early afternoon until another cold front pushes the wintry mix off to the east. Once the system is on the move the switch from rain to snow will be brief for Eastern Ohio. Mostly cloudy and cold on Sunday with some afternoon and evening light snow showers. The track of this system looks to leave an inch or two of snow for North and Western Ohio. Lower amounts to the south and east. 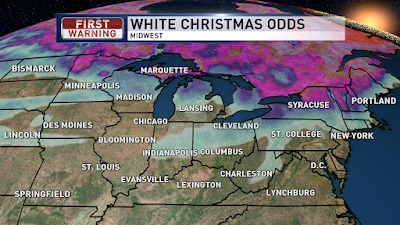 Based on the latest info, I would say Columbus has a 60% chance of a White Christmas (1" at daybreak) and a 80% chance of some snow being on the ground. Better chance for Northwestern Ohio and less snow for Southeastern Ohio. The map above is showing snow depth of 1" or more on Christmas morning. 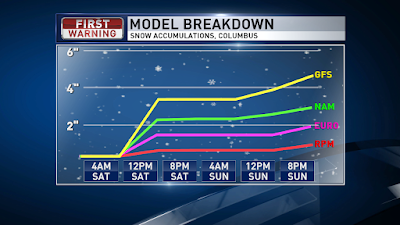 The RPM model does a good handle, historically, with snowfall totals.  The GFS normally over-predicts precip.  So take the above image with a grain of salt.  Here's the model comparison for Columbus. The GFS tends to over-predict precip. 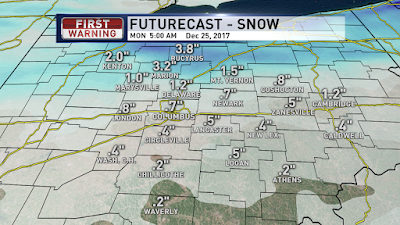 This is the RPM forecast for snow totals by 5AM on Christmas. It does appear Northern Ohio will see better conditions for more snow Sat. PM and Sunday. Southern Ohio will likely see less. A few flurries through the day on Christmas and another round of light snow later Tuesday and much colder. Have a good one!