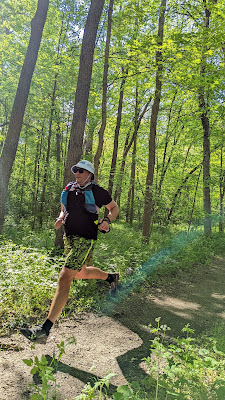 I spent yesterday morning logging as many miles as I could while balancing parenting. I woke up early and ran a little more than 7 miles around the neighborhood before the kids woke up. Then I took the kids to preschool/school. Then I went to Battelle Darby Creek Metro Park for another 14 miles. This is my final big push of miles because I am going to start tapering now and cutting back on my miles before Memorial Day.

You may remember the story of Nick Ashill in 2017. He is a professor from New Zealand and he was running across the country to raise money for pulmonary fibrosis, lung disease. He ran all the way from the Pacific Ocean and on his way to Coney Island, but was hit by a car in Madison County, Ohio. He had more than a dozen surgeries at Ohio State University Hospital before getting back on his feet. He has been training to come back and finish the run. He will be returning to the scene of the accident on Memorial Day and running the 35 miles to the OSU Hospital before continuing to the East Coast. I will be running the 35 miles with him that morning and doing LIVE short interviews on Good Day Columbus throughout the morning. Then I will be putting together another news segment for later in the day. So I will be resting up my legs for that long run. 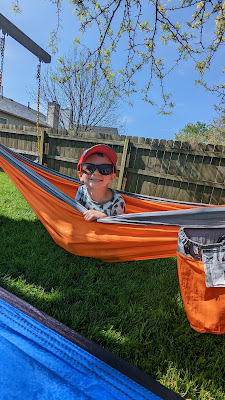 It has been a hot week, but Evan has been fighting a cold. We kept him home on Wednesday from school and he didn't mind hanging out with dad. I put up the hammocks to try to encourage him to rest instead of running around the backyard. 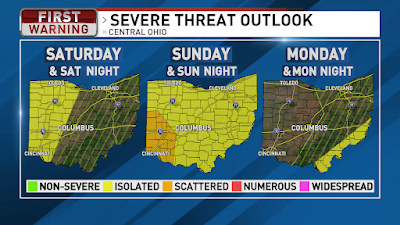 Be prepared for some storms this weekend. The chance of severe weather is pretty low, but it is possible. 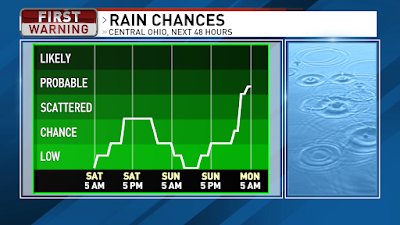 The best chance for rain will be early Monday morning. 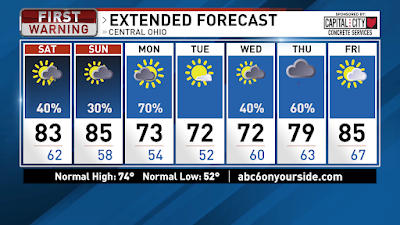 Good Saturday morning! Warmest weekend of the year(so far), is here! Today we will have partly cloudy skies and humidity will be a little higher than it has been all week. We will see isolated showers and storms popping up today. We have already had a couple spotty showers pop up, so there is a chance of rain any time today. The best chance for rain will mainly during the afternoon/evening when we warm up into the 80s. We will stay humid and hot for Sunday with morning temps in the lower 60s and then warm into the mid 80s. The chance of rain is a little lower during the day tomorrow, from a 40% chance of rain today to a 30% chance Sunday. Partly cloudy and hot will sum up Sunday for most of us. Then the chance of rain goes up more Sunday night and Monday morning with a cold front triggering a line of showers and storms. Due to the timing of the cold front (late-night into the early morning) the threat for severe weather has been downgraded to a Marginal Risk for Central Ohio, which on a scale of 0 to 5 puts it at a 1. So be aware there may be strong storms, but widespread severe weather is not likely. A few lingering showers possible Monday as cooler air pushes into the area with a high temp around 73 on Monday. Then we get a break from the heat. Mostly sunny Tuesday with a high of 72. We warm to 72 again on Wednesday with increasing clouds and then more rain returning late Wednesday and early Thursday. Temps warm into the upper 70s on Thursday then mid 80s on Friday. So we have a little dip coming early next week before we return to a summer-like pattern. Have a good one!