I tripped & fell AGAIN! Fun in the snow. Holiday forecast... 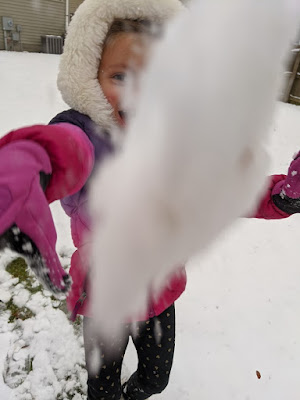 Summer and I took full advantage of the snow earlier this week.  This was one of the photos from our snowball fight... right before it hit my phone's camera. More on the snow fun in a second... 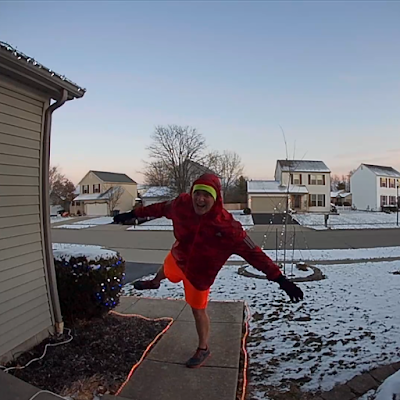 Ok... I know, I know, I know... Where are my pants!  I tripped and fell AGAIN yesterday, first time was on Sunday... So now, TWICE in one week! And the last time I tripped and fell was 2 years ago!
For a quick recap: the first trip, this week, was Sunday morning. Glove palms ate most of it and I’m very glad I was wearing gloves. Landed hard on my ribs so took Monday off of running. Tuesday run was speedwork and no tripping. Then tripped again Wednesday while on my 7 mile run. Fell more gracefully and kind of rolled through it. Both times I tripped on the sidewalk with a slight lip. I think a lot has to do with running in shorts in the cold. Kinda like your lips not working right in the cold after a while. Legs get sluggish too. Temp was 25 today and wind chill was 11. I should have been in tights or pants. Not shorts. Thankfully no major issues other than sore ribs still. Live, run, and learn!
So to the fun in the snow. 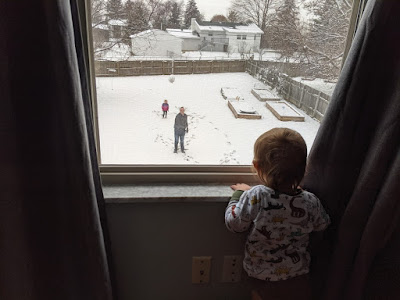 Back to the snow fun.  Evan has been running a fever, so he stayed inside and watched.  We included him by trying to throw snowballs at his window.  If you look carefully at the photo between Summer's head and the fence you can see a snowball heading toward the window.  Evan was laughing like crazy.  Then it was nap time and he is doing better now. 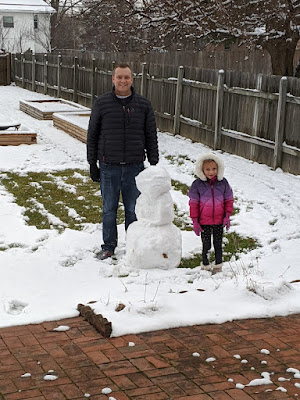 While he napped Summer and I built a snowman.  We did dress him up a little more since this photo.  She was REALLY wanting to play in the snow so we tried staying out as long as possible until we couldn't feel our hands anymore. 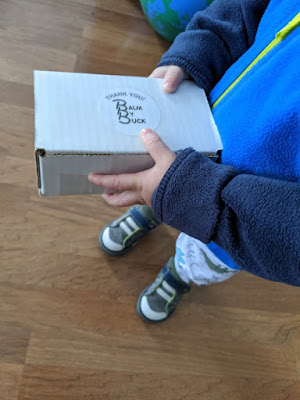 Speaking of hands... Here is Evan helping send out some of my Balm By Buck shipments. The holiday bundle was REALLY popular this year. 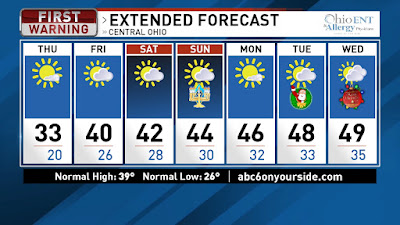 Another day with the warm coat, hat, gloves, and sunglasses. We are starting out with temps in the single digits and low teens. Thankfully winds are calm most of the area, but any breeze will make it feel colder. Mostly sunny today with highs in the lower 30s. Clear and cold again tonight with lows around 20. We will see a few clouds tomorrow, so partly cloudy, with afternoon melting as our highs warm up to around 40. Partly cloudy this weekend as well with highs in the low-mid 40s. We keep adding on a couple degrees each day for the start of next week as well with highs warming into the upper 40s with a mix of sun & clouds. So we have seven dry days ahead of us with slowly warming temps. This means that it will be dry for traveling and the snow will slowly melt during the afternoons. So chilly and dry for the start of Hanukkah and mild temps for Christmas while staying dry as well. Have a good one!

Posted by Andrew Buck Michael at 9:28 AM