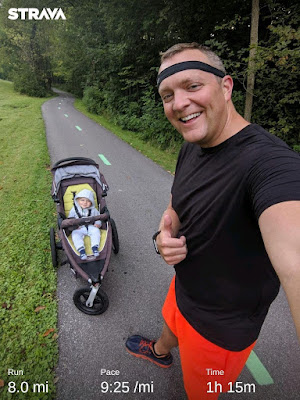 Labor Day Weekend at the in-laws. Evan was up all night Friday night. So I slept thru my alarm for the group trail run. Took Evan out for 8 miles instead, so mom could sleep. 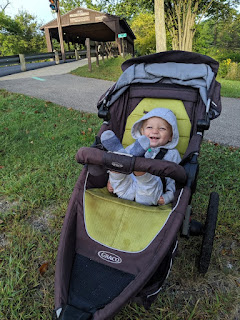 Did Evan finally sleep during the run?  No... he was loving life!

Sunday morning I was awake on-time for the group run at Sand Run Metro Park in Akron, OH. First time to this park. I got there at 7 and didn’t notice anyone I knew so I started running. 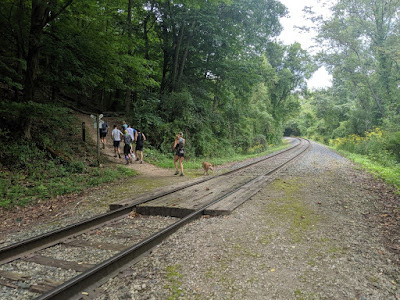 Apparently they met at 8 and I crossed paths with the group on the trails.  Running with the group made the final 10 miles fly by. I love group chats with runners. Such strange conversations. Like using Preparation H on foot blisters to dry them out. 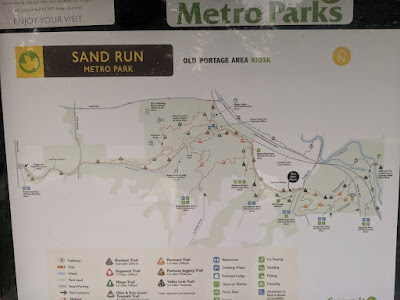 The run was great and I love that park. Lots of water fountains and restrooms. A few challenging hills to boot. 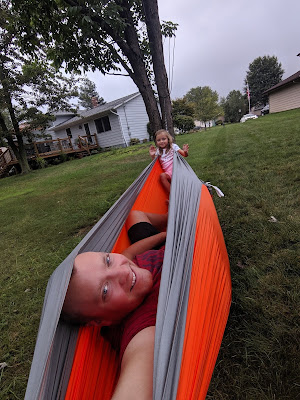 And Monday… Rest day! First time I’ve had Labor Day off in years… Only because I’m working tomorrow thru the weekend into next week… So my next long run will be tricky and not sure when I’m going to get 16 miles. 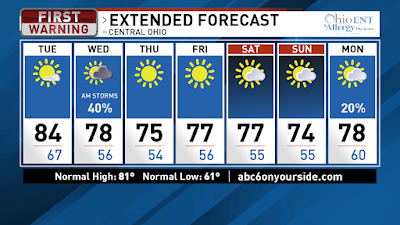 Another foggy morning, so give yourself some extra time. The most dense fog has been in Southern and Eastern Ohio and will clear out quickly and give way to a mix of sun & clouds for the rest of the day.  It will be a warm afternoon with highs in the mid 80s and feeling humid as well. 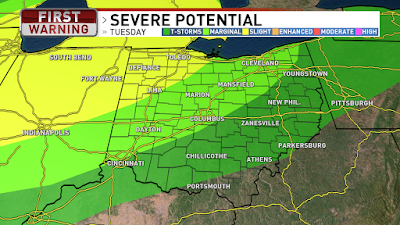 Storms roll in tonight from the northwest and weak as they move across Ohio.  The main storms will roll in after midnight and could get gusty with some of the cells.  The Storms Prediction Center has far Northwestern Ohio is in the Slight Risk for severe storms.  As mentioned, the storms will weaken heading toward Central Ohio and areas along and just to the north and west of I-71 are in the Marginal Risk for severe storms. Southern and Eastern Ohio are in the general thunderstorm risk as the storms continue to weaken overnight.  This rain is associated with a cold front and most of the rain should be out of here by day break Tuesday. Tuesday we will have a mix of sun & clouds with humidity dropping through the day and highs in the upper 70s.  Thursday and Friday are looking fantastic with highs in the mid 70s and mostly sunny skies.  Another cold front Saturday has a 10% chance of triggering some rain, but our air will be drier, so the chance of rain is very low.   Partly cloudy for Saturday and Sunday.  With the cold front our temps will go from the upper 70s on Saturday to the mid 70s on Sunday, so not a big drop in temps.  Another slight chance of rain returns early next week. 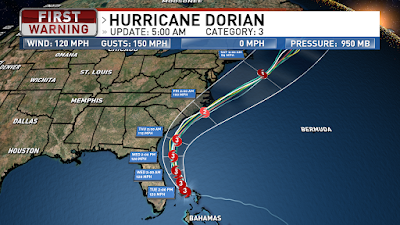 Hurricane Dorian remains a Category 3 storm with sustained winds of 120 mph. It remains nearly stationary over the Bahamas.   The storm has remained stationary because it lost the steering winds as high pressure over Bermuda has weakened.  The storm will now start moving north gain traction thanks to the jet stream and slowly weaken as it moves north.  Dorian will start moving northward today and will ride along the Florida, Georgia, and Carolina coastline through the rest of the week with strong winds and heavy rain.

Have a good one!

Posted by Andrew Buck Michael at 8:24 AM