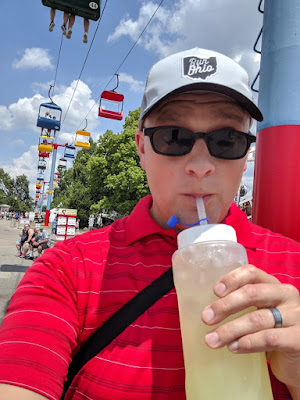 I took Summer to the Ohio State Fair last week and she had a blast.  I got one of the giant Kool-Aids with free refills.  I probably refilled it more than the average person, but it was perfect on a hot day.
Didn't get quite as much food as I had planned, but that is probably for the best.  ;) 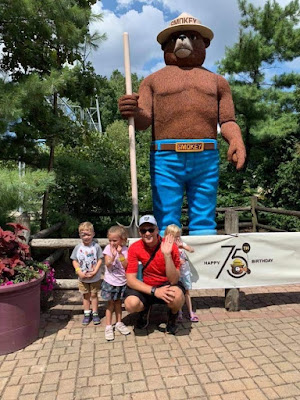 I HIGHLY recommend checking out Smokey in the ODNR area of the fair.  One of the parents did not know about it and it was a lot of fun to see the kids when Smokey called out their names and talked with them. 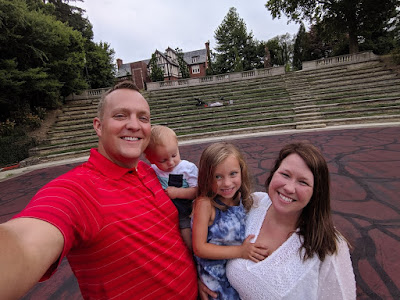 Last week was also the 8 year anniversary for getting married to Dawn.  We like to go back to Browning Amphitheater for a picnic and reminisce.  So much fun watching Summer dancing on stage as well.  Evan was a big subdued because he is getting over a viral infection, but he seems to be making a turn for the better.  So I spent a lot of the weekend with him.  Summer went to visit Dawn's mom for the weekend for a lot of fun at her grandparents. It was good for Summer to be away so Evan could rest without Summer wanting him to play. All he wanted to do was rest. With Summer out of town, Dawn was insistent with me taking time in the mornings for runs and then I had Evan in the afternoons while she met her cousin to catch up. 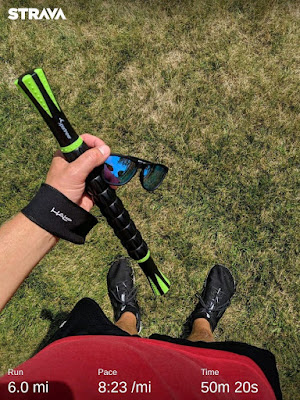 I went back to the eye doctor on Friday and got the green light to start running again.  But I need to take some precautions.  Sunglasses are needed to avoid as much dust as possible from getting into my eyes along with a headband to keep the sweat from getting into my eyes too.  Went for a six mile run after the appointment and I used the roller afterward to loosen up the muscles a little more. 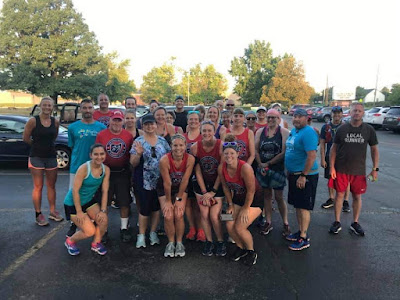 Had a great morning run Saturday with the Columbus Westside Running Club. 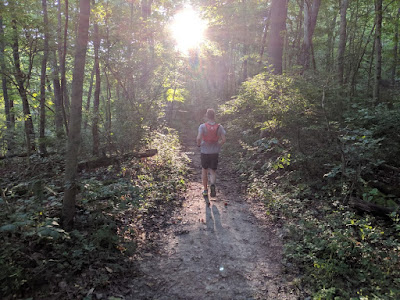 Then an early Sunday run on the trails. 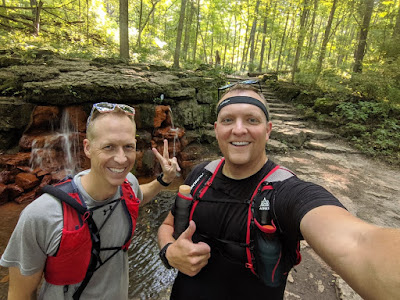 We even got to see the yellow springs yesterday.  So I went from a week of rest to 27 miles within three days.  My legs are a little sore now, so taking today off as a rest day, but happy to get back into the training cycle for races this fall. 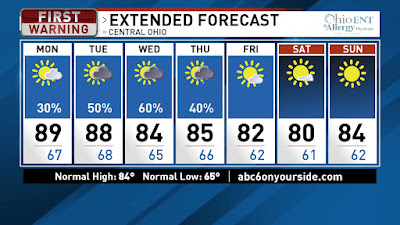 Have the rain gear handy this week!  Today we will start warm and then become hot and humid this afternoon with high temps approaching 90.  We will have morning sun followed by building clouds and isolated pop-up showers and storms, mainly for the afternoon and early evening.  The chance of rain today for the area is about a 30% chance for an individual location.  There is a better chance of rain on the way. Partly cloudy and another very warm day Tuesday.  Scattered showers and storms will develop in the afternoon on Tuesday.  We will have a little more energy to get the rain to develop, so our chance of rain will be a 50%-60% for Tuesday and Wednesday.  So a decent part of the area will see rain between Tuesday or Wednesday, but not a guarantee for everyone.  It will be warm and humid for the first half of the week then a cold front will trigger some lingering rain Thursday.  Once that front passes, then humidity and temps will be falling. Friday and the weekend is looking spectacular.  Right now we are on track for high pressure bringing sunshine and highs near 80 with lower humidity.  Have a good one!