Goodbye glasses! I got LASIK. Hot today then storms on the way... 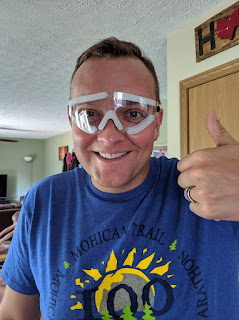 So long glasses!  Well... sunglasses and then THIS cool sleeping mask needed while I sleep at night because...  I GOT LASIK!  I was in eye glasses for 22 years and contacts for about 17 years.  I had some eye issues the past couple months and I had ridges and bumps on the underside of my eye lids.  So no contacts for a while and glasses needed while I was on steroid drops.  I would have then needed to switch to more expensive contacts, so I talked to my eye doctor Tuesday about LASIK and they said they could set me up with a free consultation, but it might be a couple weeks for that.  Well... They said they could get me in at TLC Laser Eye Center in Dublin on Thursday... Then Thursday they said they had a cancellation for the Friday LASIK procedures and after that the next procedures would be towards the end of next month.  So I talked to my wife and the LASIK cost more up-front, but with no more contacts it should pay off within a handful of years.  Overall the entire process was very smooth and very quick.  I was in and out in less than 90 minutes and the procedure itself only took about 15 seconds per eye.  I have a LOT of eye drops for the coming weeks.  I also need to avoid any dust, smoke, and debris in my eyes.  No sweat either, so no running for at least a week and I am glad I got in some good runs last week... Anyway, I went to TLC Laser Eye Center in Dublin and I would totally recommend them. Dr. Doyle and the whole team was amazing. I don't get paid for saying that or a discount, but from one person to another, I am very glad I had it done.  Let's briefly look back at my last week with glasses before looking ahead to storms on the way... 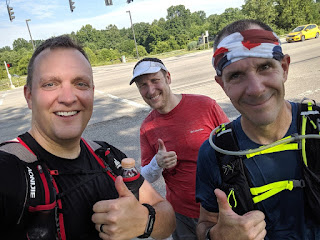 I got a solid 13 miles in with some good friends on the trails last weekend.  I ran without glasses and told them to alert me to any big roots or rocks.  HAHA.  No tripping occurred. 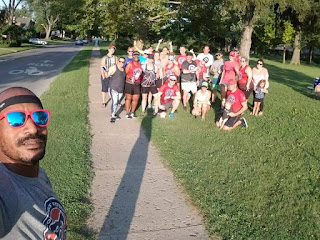 Last Tuesday was a BEAUTIFUL day so I got a nap when the kids napped and the whole family went out to join the Columbus Westside Running Club for their 6:15 Tuesday runs at Westgate Park. 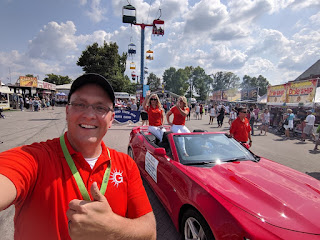 Wednesday was the opening day for the Ohio State Fair and Good Day Columbus was asked to be the grand marshals for the parade!  So much fun. 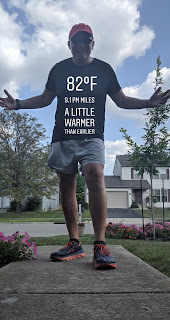 Thursday was my LASIK consultation and I was told I was not able to run for at least a week because you cannot get sweat in your eyes. So I ran 9 miles in the afternoon to try to get a long run in before I got a week of rest. 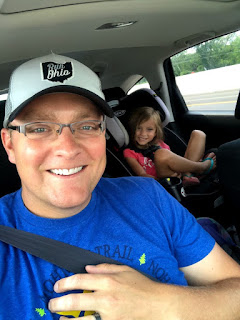 Friday was LASIK day and this is one of the final photos wearing my eye glasses. There was only one small issue... I had a blood vessel burst in my right eye. I will spare you the zoomed in photo. Which was a possibility they told me about beforehand, but if that is my only issue, no big deal. It will go away in the coming weeks. My vision looked like someone put Vaseline on my glasses heading home. The rest of the day was a mandatory 4 hour nap after the procedure and taking it easy.  My vision was much better after the nap and only a slight bit of haze and smokey appearance, which has been slowly fading.  I went back Saturday morning and had my eyes checked again and got clearance to start driving.  We debated on going to the Ohio State Fair.  The doctor said it was ok, but with limitations due to the dust, smoke, and germs with the animals.  So we decided to take it easy on Saturday midday due to timing with the kids naps.  We will get to the fair eventually...  So a restful midday Saturday before I had to head to the Clippers game for work that evening. 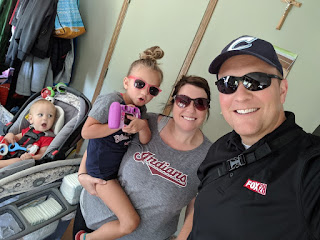 I love Evan's face in this photo before we left for the game. "Where are my sunglasses?" 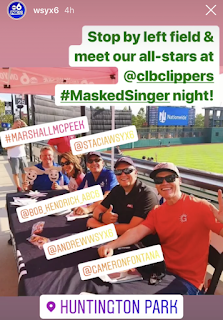 Saturday was the WTTE Masked Singer night so we had one of our own singing some songs for people to guess who was singing... 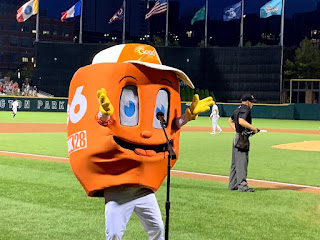 Here is the 7th inning stretch... And the singer inside of Mugsy.... 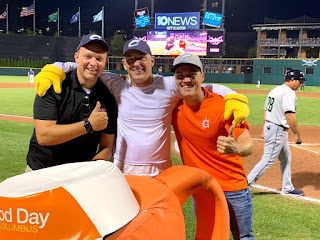 Bob Kendrick!  Lots of fun!  It was nice to see and hang out with the night-side gang.  We barely cross paths, so it was great to spend some time with Bob, Stacia, and Marshall in a fun setting. 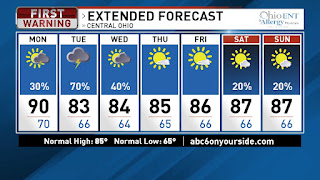 One more hot day before rain will cool us off.  We will start the day with sunshine and a warm temps in the upper 60s this morning.  Humidity will be high today and as we approach 90 for the high temp, it will feel like the lower 90s.  We will have winds out of the southwest between 10-20 mph through the day to help make it feel a little cooler.  There is a slight chance for some isolated showers and storms popping up this afternoon and evening.  More showers and storms likely overnight and Tuesday as a cold front approaches.  Right now the threat for severe weather is low, but a few gusty cells and small hail are possible.  The rain will be on and off on Tuesday with highs in the lower-mid 80s and humidity remaining high.  Our humidity falls through the day on Wednesday with some lingering isolated rain and high temps in the mid 80s. Let's keep Thursday and Friday dry with mostly sunny skies as high pressure builds to our north.  The cold front from Tuesday will stall out to our south and southeast, so there is a slight chance of rain near the Ohio River, but Central Ohio looks to remain dry at this point.  More clouds to the south and east because of that front with more sun to the north and northwest. So warm and mainly dry for Thursday and Friday with low humidity and highs in the mid 80s. That front to the south will slowly shift closer to Ohio for Saturday and Sunday, so let's go with a 20% chance of rain as our temps start warming into the upper 80s and humidity is slowly increasing.  If you have any plans outside next weekend I wouldn't cancel them right now, but make sure to have a back-up rain plan ready, especially for the afternoons since the rain may be the PM pop-up rain.  Have a good one!