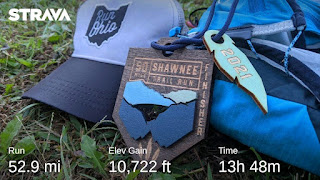 That was rough!  I knew it would be a challenge to run the Shawnee 50 over the weekend, but I had to dig deep for this one.  I went down Friday evening and stayed at the lodge with a friend.  The race started Saturday morning at 5AM.  I figured I could finish in about 15 hours, but I went out strong and tried to stay as strong as possible and finished a little under 14 hours. 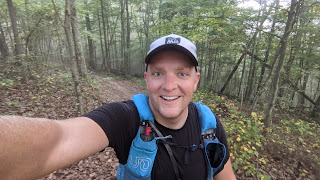 The trails were in really good shape. The early morning leaves were a little damp, but otherwise very runnable. 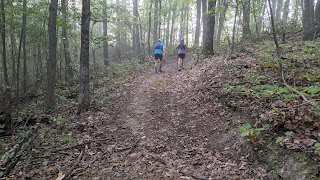 The hills are no joke at Shawnee State Forest.  But the trail markings were phenomenal and it would be very hard to get lost for the race. 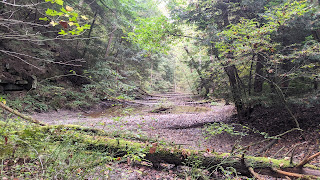 I was a little surprised how dry the streams were for the run. It warmed up to around 80 in the afternoon and I did get lightheaded and dizzy a few times. This was likely due to some dehydration, but I was pushing fluids the entire race and actually had the slosh stomach feeling at times because I was trying to drink so much. I took a couple 30 second breaks to reset and then would keep pushing on. 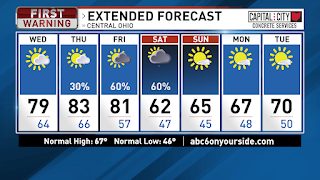 Staying warm for us, for 3 more days... A really nice day on tap today then we warm up more as the chance of rain goes up, but then turning much cooler for the weekend. Today will be partly cloudy with highs in the upper 70s and just a light breeze out of the southwest. More clouds tonight and a very slight chance for spotty rain. Partly cloudy for Thursday as well with a chance of isolated rain and temps warming up into the lower 80s. More warm air on Friday with partly to mostly cloudy skies along with scattered showers and a few storms. Temps warming to around 80 again on Friday. The best chance for rain will be Friday night overnight into early Saturday morning with showers and storms possible, as a strong cold front swings through. Early rain Saturday then the rain races to the east. Much cooler for the weekend with highs in the lower 60s on Saturday and then mid 60s on Sunday with a brisk breeze out of the west and northwest. Mostly to partly cloudy skies for Saturday then a little more sun on Sunday. Temps slowly warming back up to around 67 Monday and 70 by Tuesday with mostly sunny skies early next week. Have a good one!